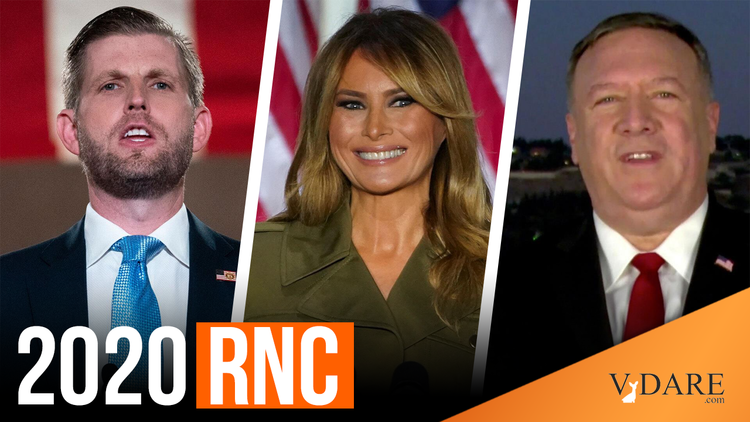 Previously: First Night Of RNC Mostly Stays On America First Message—Except For Cringe Condemnations Of "Racism" And Support For “Criminal Justice Reform” I. E. Letting Criminals Out Of Jail

The first night of the Republican National Convention promised an America First event. The second night undermined that whole impression, particularly on the subject of immigration and American identity.

The major disgrace: President Trump hosting a naturalization ceremony for five (non-white) immigrants during the convention. One of the immigrants wore an Indian dress and another wore a hijab during the ceremony. Trump praised the immigrants for working hard and following the rules.

"There’s no higher honor and no greater privilege and it’s an honor for me to be your president."#RNC2020 pic.twitter.com/nm4FiZyot7

The idea was reportedly engineered by Jared Kushner and was clearly intended to show Trump supports LEGAL immigration—completely reversing his August 15 2015 promise to cut it. The optics of welcoming five random non-whites into the country for political gain were not good. Moreover, the ceremony may have violated the Hatch Act, which excludes government officials from using government events or buildings for campaign activities. All this just to score a cheap political point that’s at odds with Trump’s core message.

Acting DHS Secretary Chad Wolf presides over a naturalization ceremony at the White House during the RNC. His appearance is an apparent violation of the Hatch Act, which prohibits federal employees from performing political activities on duty https://t.co/tz1YGPbJoz pic.twitter.com/N0oLsprTZM

The second problem of the night: the last-minute banishment of Angel Mom Mary Ann Mendoza. Mendoza became the victim of a Journofa pressure campaign over an allegedly anti-Semitic retweet she made Tuesday. Mendoza deleted and apologized for the tweet, but it wasn’t enough to save her [RNC Speaker Cancelled After Boosting QAnon Conspiracy Theory About Jewish Plot to Enslave the World, by Will Sommer, The Daily Beast, August 25, 2020].

Her speech was likely intended to highlight the horrors of illegal immigration (her son, Arizona police Sgt. Brandon Mendoza was killed by an illegal alien) which would’ve somewhat softened the blow of the embarrassing naturalization ceremony. But her banishment ensured that no speech focused on this national danger­—and showed a party panicked by “cancel culture.”

Another lowlight of the night: Tiffany Trump’s definition of American identity. In her opinion, America has no identity--only ideas. The party bureaucrats loved this statement so much that the official GOP account shared it on Twitter.

Last night was a major disappointment and undermined Trump’s appeal to the Historic American Nation. But maybe the Democrats’ immigration lunacy is making that appeal for him.