SCIENTIFIC AMERICAN On Decolonizing The Search For Extraterrestrial Intelligence

… But increasingly, SETI scientists are grappling with the disquieting notion that, much like their intellectual forebears, their search may somehow be undermined by biases they only dimly perceive—biases that could, for instance, be related to the misunderstanding and mistreatment of Indigenous peoples and other marginalized groups that occurred during the development of modern astronomy and many other scientific fields.

For years, science historian Rebecca Charbonneau has been exploring this possibility in the context of SETI. She earned her Ph.D. at the University of Cambridge studying the history of radio astronomy, and is currently a historian in residence at the Harvard-Smithsonian Center for Astrophysics, as well as a Jansky Fellow at the National Radio Astronomy Observatory. Her most recent paper, “Imaginative Cosmos: The Impact of Colonial Heritage in Radio Astronomy and the Search for Extraterrestrial Intelligence,” appeared last year in a special SETI-themed issue of the American Indian Culture and Research Journal. To weed out biases and enhance the quest to find life somewhere among the stars, she argues, SETI’s practitioners must find a way to “decolonize” their field. But what exactly does that mean?

After all, nobody has ever before thought about the idea that alien civilizations might happily live with stone age technology and not feel the need to progress to the industrial age. I mean, other than film director James Cameron, shown here at a screening of Avatar at the U.N. Permanent Forum on Indigenous Issues, towering over the charmed indigenous ladies like some great white god out of a Joe Sobran quote. 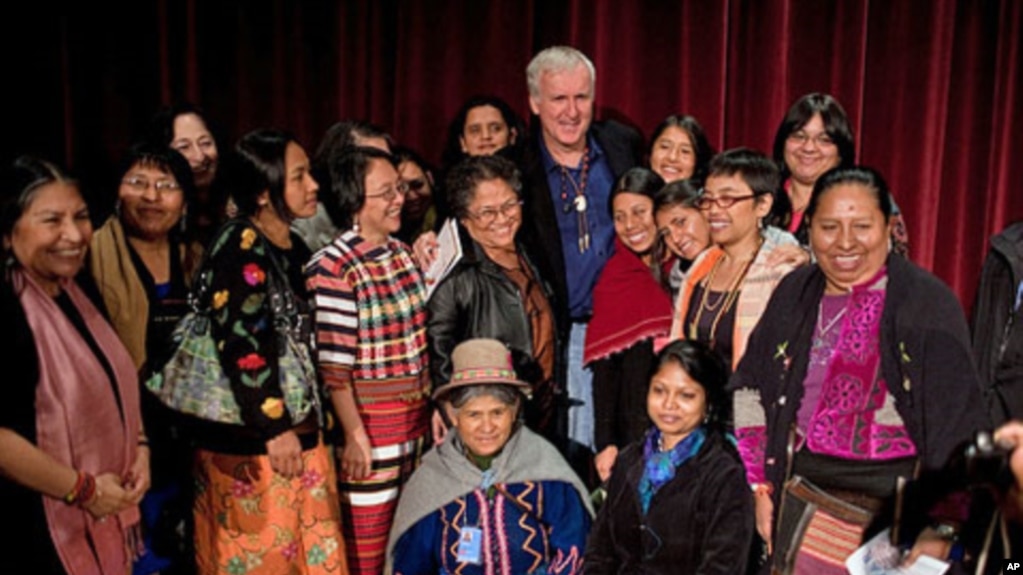 Oh, and Cameron lifted the plot about an evil human mining company oppressing idyllic native aliens from the second half of Robert Heinlein’s 1948 juvenile novel Space Cadet. And who knows where Heinlein stole the idea? (H.G. Wells, maybe?)

Scientific American spoke to Charbonneau about decolonization, SETI’s feedback loop with its own context and history, and how combating cultural biases in the search for alien life can be a case study for similar reforms in other STEM fields. ...

Q. “Decolonization” seems to be a problematic term, in part because it carries so much historical baggage and is used in many different ways across many different fields. Finding consensus about what it actually means is challenging, to say the least. So, to start out, what does decolonization mean to you?

A. It’s something I think about a lot because it is a very difficult problem. Some of the major problems with the term decolonization is that it has been watered down to mean any kind of conversation about colonialism. That really weakens the term. There was a paper written by these two great scholars, Eve Tuck and K. Wayne Yang,

But a lot of Wokeness is this type of Mutual Admiration Society for lightweight non-STEM academics. This stuff isn’t exactly Carl Sagan and Freeman Dyson relaxing with some speculation, it’s just backscratching among academics pumping up each other’s reputations for funding reasons.

called “Decolonization Is Not a Metaphor,” where they make the argument that when we’re talking about decolonizing, it shouldn’t be about just speaking in metaphors. This is actually a real-world process that has to happen—actual, physical colonization which needs to be undone.

Q. How does this apply to SETI?

A. Oftentimes when we think about colonialism in SETI, we do think of it primarily in metaphors, right? Space being “the final frontier,” first contact with aliens as a stand-in for encounters with Indigenous peoples—that sort of thing.

The golden age of space exploration coincided with an era when Americans were highly proud of their frontier heritage—e.g., Walt Disney opened Frontierland at Disneyland in 1955 and JFK announced his “New Frontier” in 1961. Now, in contrast, we are ashamed of it.

Fortunately, our new more sensitive society has done a heckuva job decolonizing the Arecibo radio telescope (above) in Puerto Rico.

… And SETI in particular carries a lot of intellectual, colonial baggage as well, especially in its use of abstract concepts like “civilization” and “intelligence,” concepts that have been used to enact real, physical harm on Earth.

As opposed to harmless phenomena like “savagery” and “stupidity.”

Q. If decolonization isn’t just a metaphor but rather a process, that implies it’s about reckoning with history and striving to fix past mistakes. That’s something easy to say but much harder to actually define, let alone to do. In the context of SETI, what might decolonization’s “reckoning” look like?

A. It’s a great question. Ultimately, in Tuck and Yang’s interpretation of decolonization, this would look like prioritizing the sovereignty of Indigenous cultures and respecting their wishes regarding settled scientific infrastructure. And while that is critically important, we shouldn’t entirely discount the symbolic, dare I say metaphorical, nature of colonialism at play in SETI. Fundamentally, SETI concerns listening to alien civilizations, ideally, but we also have to get better at listening to Earthlings! We’re not very good at that right now, but we’re starting to move in that direction. There are members of the SETI community, myself included, who are very interested in listening to marginalized and historically excluded perspectives.

And to be paid for listening to them.

A lot of SETI scientists start their research from the technical search perspective, without deeply considering the implications and impact of their listening. They are simply interested in finding evidence of intelligent extraterrestrial civilizations, which is valuable. I think that to do that, however, without thinking critically about how we conceptualize big abstract ideas, such as “intelligence” and “civilization,” and without considering the ethics of the search and its cultural implications, would be a huge mistake. These ideas are tightly bound with the histories of racism, genocide and imperialism, and to use them haphazardly can be harmful. How we use these symbols of the past when thinking about alien civilizations also says a lot about how we view Earth’s civilizations, and this is where Indigenous Studies scholars, such as those who contributed to the special SETI issue of the American Indian Culture and Research Journal, can make great contributions. They have a unique perspective on the impact of contact, and how concepts like “intelligence” can be weaponized.

Q. It does feel ironic. SETI is built around listening for something out there but perhaps at the cost of ignoring much of what is right here on this planet. For instance, you’ve repeatedly mentioned the cultural implications of terms such as “intelligence” and “civilization,” but how about the word “alien,” too? All of these terms have very different connotations—even destructive ones—as historically applied to Indigenous peoples or, for that matter, as applied to all the other sentient beings that live on Earth. Even now some people don’t consider nonhuman animals to be sentient, let alone possessing any real intelligence. And throughout history, building empires has come at the cost of discounting and dehumanizing Indigenous peoples as lesser beings, incapable of sophisticated thought and societal organization. Yet “intelligence” is right there in SETI’s name. Should we reconsider that framing?

A. SETI is designed to listen outward, but as you said, it’s not always so great at listening inward. And I should preface this by saying that there are members of the SETI community who are very interested in doing this work.

What work? This is the easiest work ever. You sit around and make up reasons why words hurt your feelings. E.g., let’s do Search for Extra-Terrestrial Intelligence:

The word ‘search’ is highly problematic, with a racist past. It featured in the title of African explorer Henry M. Stanley’s famous memoir “The Search for Dr. Livingstone.” The concept of “searching” is highly redolent of white male exploration and discovery.

“Intelligence” is highly discriminatory. Intelligent people know that stupidity is just as good as intelligence because they are intelligent, which makes them better than the stupid. Or something.

OK, here’s Dr. Charbonneau riffing on the intelligence of stupidity better than I can:

… As for “intelligence,” that’s certainly a dangerous word, and it has been used in very harmful ways. Eugenics, for example, used the limited concept of “intelligence” to justify genocide. I’m therefore sometimes troubled by the word intelligence in SETI. For one thing, we might not even be able to identify what intelligence is. And because of this, maybe we [will] someday make contact and [won’t] even recognize that we’ve done so. But it’s also important to think very critically about why we search for intelligence. Is there something special about intelligence? Does intelligence deserve more respect than whatever we might perceive to be nonintelligence? We might perceive microbes as nonintelligent life, for example. Does that life have a right to exist without us bothering it? Or is it just germs—just bugs that we are going to just bring back and study and pick apart?

We may not be able to recognize intelligence when we see it, and we may not respect or honor things we don’t perceive to be intelligent. That is what we did in many colonial interactions. Certain countries in Europe made “first contact” with Indigenous peoples, perceived them to be nonintelligent and therefore not worthy of life, not worthy of respect or dignity. And that is troubling to me. What’s going to be different next time?

Q. Let me push back on one aspect here, though. Might there be a degree of incompatibility between openness to other ways of being and SETI’s core tenets? After all, SETI—all of astronomy, really—is built on the assumption of universality, that the laws of physics are the same throughout the observable universe regardless of one’s social constructs. A radio telescope, for instance, will work the same way whether it’s here on Earth or somewhere on the other side of the cosmos. Regardless of context, certain shared fundamentals exist to allow common, predictable, understandable outcomes. SETI takes this conceit even further by elevating mathematics as a universal language that can be understood and translated anywhere and by anyone. What are your thoughts on this?

A. So let me preface this by saying I am not a mathematician. But I do write about math.

Personally, I am not a mathematician either. So I don’t write about math.

And there are many anthropologists who study mathematical systems in different cultures. They see that, even on Earth, among human cultures, there are different ways of thinking about math.

And while mathematics is the language we use on Earth in our hegemonic culture to describe what we are seeing, we don’t know that another species will use that same language to describe what they are seeing. So while I don’t want to discount universality, I do think any assumptions about this are perhaps optimistic, to put it kindly. The core of what I’m trying to say is that we must critically interrogate

our assumptions about life and universality, because we will all too often find that they say more about us than aliens.

Rather than paying humanities and ed school grad students to ask indigenous people about how to search for extraterrestrial intelligence, you could just start a Reddit topic and ask for clever ideas from the countless number of science fiction stories on the subject.