Savage Mexico: Missing College Students May Have Been Found

Last week I wrote about the level of crime in our southern neighbor that makes them a most undesirable society from which to admit immigrants: Mexico: 43 Disappeared Students Highlight Deep-Seated Lawlessness. Now those missing young people may have located — and it is tragic news for the families.

Bodies have been found, although they are unidentifiable except perhaps by DNA because the remains were burned for hours for maximum destruction. What’s really astonishing, even for Mexico, is that apparently the local mayor ordered the students (who were engaging in a political demonstration) to be deep-sixed by the the town’s police who then handed them over to local gangsters for final disposal.

What a country! Let’s have more diverse immigrants from that society! 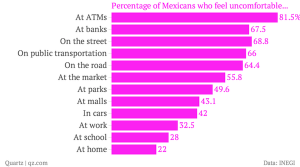 Many Mexicans are affected by the level of crime that appears to be the norm. An interesting poll was published last year, asking in what situations Mexicans felt uncomfortable, and over two-thirds were uneasy at ATMs, at banks and on the street (pictured).

Pew Global published a wide-ranging poll of the third world earlier this month, Crime and Corruption Top Problems in Emerging and Developing Countries. When asked _____ is a “very big problem” for their country, Mexicans responded with Crime at 79 percent and Corruption at 72 percent.

Mexicans may “move” to the United States to escape violence, but the social norm of crime is big part of the cultural package from a nation that celebrates its criminals in song and behavior.

Back to the missing students…

Remains could be those of 43 missing Mexican students, CNN, November 8, 2014

(CNN) — The 43 Mexican students who disappeared in southern Mexico in September were abducted by police on order of a local mayor, and are believed to have been turned over to a gang that killed them and burned their bodies before throwing some remains in a river, the nation’s attorney general said Friday.

This is the conclusion that investigators have reached, Attorney General Jesus Murillo Karam said, though he cautioned that it cannot be known with certainty until DNA tests confirm the identities.

This will be a challenge, he said, as the badly burned fragments make it difficult to extract DNA.

Parents of the college students reacted immediately, some saying the evidence is inconclusive and insisting that their children are alive.

“We are not going to believe anything until the experts tell us: You know what? It is them,” Mario Cesar Gonzalez, the father of one of the students, told CNN en Español.

Another parent, Isrrael Galindo, said the government is getting ahead of itself in an attempt to get protests over the disappearance of the students to stop and the public to stop demanding answers.

“The government is trying to resolve things its way so that to rid itself of this great problem it is facing,” Galindo, who lives in California but whose wife and children are in Mexico, told CNN en Español.

The parents have been highly critical of President Enrique Peña Nieto for his administration’s handling of the investigation.

A cell phone video from a closed-door meeting with the President, released on YouTube, shows family members accusing Peña Nieto of being out of touch with who the students are. One family member on the recording suggests the President should resign if he can’t deliver answers.

Describing the federal investigation as one of the most complex in recent times, Murillo outlined what he said befell the students from a rural teacher’s college in Ayotzinapa, Guerrero state.

The victims were men mostly in their 20s studying to become teachers at a college in rural Ayotzinapa. On September 26, they traveled on buses and vans to nearby Iguala for a protest about lack of funding for their school. They haven’t been seen or heard from since.

Three men arrested in connection with the disappearance of the students admitted to having killed a large number of people believed to be the students, Murillo said.

Murillo said police officers handed the victims to the three men, who he said belong to the Guerreros Unidos gang.

Authorities have arrested Iguala Mayor Jose Luis Abarca, called the “probable mastermind” in the mass abduction, and his wife, Maria de los Angeles Pineda. They were captured while hiding out in Mexico City earlier this week.

The school the missing students belong to has a history that dates back more than 80 years and is known as a bastion of the Mexican left. Its students are known for their activism.

Officials have said that when the mayor and his wife learned the students’ protest would disrupt one of his events, the mayor ordered then-Iguala police Chief Felipe Flores Velasquez to stop the demonstration. The former police chief remains a fugitive.

Shortly after Murillo announced the latest in the investigation, President Peña Nieto said the findings “outrage and offend all of Mexican society.”

“With firm determination, the government will continue the efforts for a full accounting of the incident,” Peña Nieto said. “The capture of those who ordered it isn’t enough; we will arrest everyone who participated in these abominable crimes.”

So far, 74 people have been arrested in connection with the disappearance of the students, the government said.

Murillo on Friday repeated the claim that the order to abduct the students came from the mayor. The police confronted the students twice on their journey, killing three in one confrontation, and forcibly taking all of them to a police station the second time, the attorney general said.

The students were then moved to a location where they were handed over to members of the Guerreros Unidos gang, he said.

The gang members transported the students in various trucks to a garbage dump, Murillo said.

Some were dead already, and those who were alive were questioned by gang members about their alleged involvement with other gangs, Murillo said.

There is no evidence to show that the students were involved with gangs, he said.

The suspects told police they don’t remember exactly how many people they killed, but they were told by their leaders that there were more than 40, Murillo said.

The abducted men were then burned at the dump in a fire that was kept alive for at least 14 hours by adding diesel fuel, tires and debris, the attorney general said.

The next day, the gang members were ordered to further break up the remains and place them in black garbage bags that were tossed into the San Juan River, Murillo said.

Scuba divers searched the river and found pieces of the bags and remains. One bag was found intact, with human remains inside, the attorney general said.

“I know the huge pain this information gives the families, a pain that we all share in solidarity,” Murillo said.

The Iguala incident has sparked protests all across Mexico, some of them violent. There have been multiple acts of vandalism in Guerrero state. Protesters have blocked roads and tollbooths in cities like Chilpancingo, the capital. They have also blocked access to shopping malls in the beach resort of Acapulco.

The protests spread to the capital, where tens of thousands marched this week demanding that the missing students be found alive.

The governor of Guerrero state — criticized for not acting quickly enough after the abductions — has taken a leave of absence.