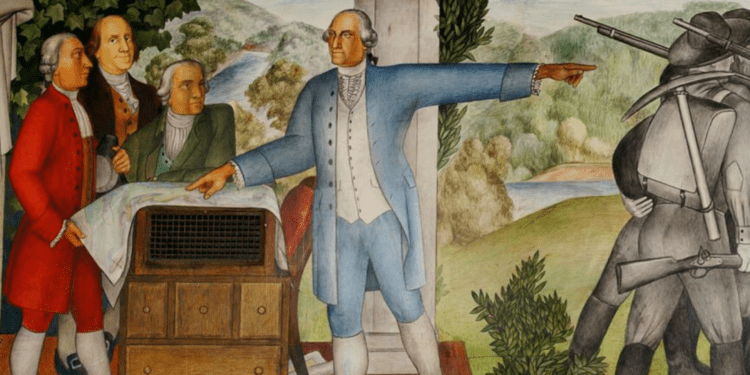 San Francisco to Spend Up to $875,000 to Cover Up a Communist Mural for Being Racist

From the San Francisco Chronicle:

“It might be art and it can also be racist; it can be both,” said board member Alison Collins. “It’s not just about removing them from public view, it’s also about righting a wrong.”

Painting over the mural would cost at least $600,000, with the majority of the cost in producing an environmental impact report.

In addition, supporters of the mural have vowed to sue if the board voted to destroy it and legal costs could add to the cost, district officials said.

Supporters argued the historic work, painted by Russian emigre Victor Arnautoff, is an important piece of art that is actually critical of oppression and imperialism and that destroying it or covering it equates to book burning.

Arnautoff was a Communist Party USA member. He led an eventful life. The son of an Orthodox priest in Russia, he became a White Russian cavalry officer, then the cavalry colonel for a Chinese warlord. In Mexico, he became the assistant to the famous Stalinist painter Diego Rivera, Frida Kahlo’s husband. He moved to San Francisco and was hired to paint Rivera-like murals by the New Deal Works Progress Administration. During the McCarthy Era, Republicans tried to get him fired from Stanford, but the university didn’t heed them. In the early 1960s, he retired from teaching art at Stanford and moved to the Soviet Union, where he died in Leningrad in 1979.

Critics, including students and community groups, called for the 1,600-square-foot mural to be painted over with white paint

Probably in 2029, San Francisco will pay $3.75 million to paint over the white paint with anti-racist beige paint.