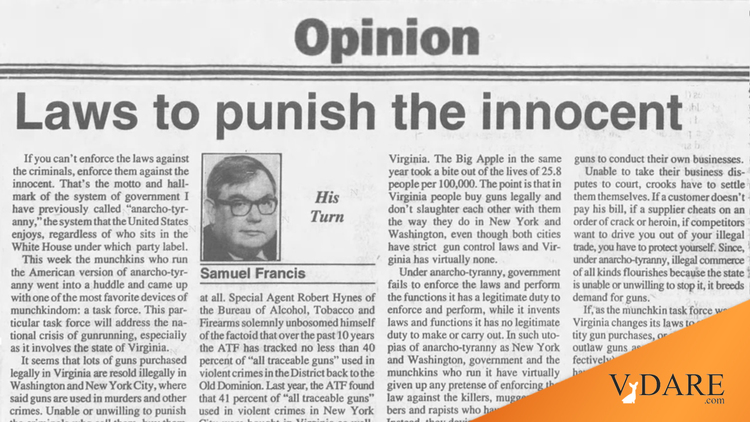 Sam Francis On Anarcho-Tyranny, 1992: Laws To Punish The Innocent

Earlier: Anarcho-Tyranny And Sam Francis Continue To Enter The Mainstream

When Peter Brimelow said earlier that he thought we'd linked to Sam Francis's first ever use of the word anarcho-tyranny in 1997, a reader replied that it went back earlier than that.

I believe Sam Francis' first published column on the concept "anarcho-tyranny" dates to May 1992, was about the April 1992 LA Riots.

If so, "#AnarchoTyranny" turns thirty in the coming spring.

He used the term in other 1992 columns, including this one:https://t.co/Skcxo5eje3

With a link to a screenshot of a 1992 column by Sam Francis on weird gun control proposals of the 90s, with this note.

Here's the column. The 1990s was a decade of high crime, which places like New York and the District of Columbia responded to by (a) refusing to punish criminals, and (b) trying to restrict the gun rights of regular Americans.

Laws To Punish The Innocent, by Sam Francis, December 8, 1992

If you can’t enforce the laws against the criminals, enforce them against the innocent. That’s the motto and hallmark of the system of government I have previously called “anarcho-tyranny,” the system that the United States enjoys, regardless of who sits in the White House under which party label.

This week the munchkins who run the American version of anarcho-tyranny went into a huddle and came up with one of the most favorite devices of munchkindom: a task force. This particular task force will address the national crisis of gunrunning, especially as it involves the state of Virginia.

It seems that lots of guns purchased legally in Virginia are resold illegally in Washington and New York City, where said guns are used in murders and other crimes. Unable or unwilling to punish the criminals who sell them, buy them or use them in these metropolises, the munchkins must therefore punish law-abiding Virginians by restricting their right to buy guns.

“Virginia," pronounced one of the chief munchkins, U.S. Attorney for Virginia's Eastern District Richard Cullen, “is a gunrunning state,” and Cullen says he is “embarrassed" by that fact. Actually, maybe Virginia should be embarrassed by him.

Goodness gracious! Next thing you know, they’ll fill their trunks with cigarettes and beer. Then where will anarcho-tyranny be?

The fact that never passed the lips of the munchkins and indeed probably never sauntered into their heads at all is that in 1989 there were 71.9 murders for every 100,000 people in the District but only 7.9 per 100,000 in the whole state of Virginia. The Big Apple in the same year took a bite out of the lives of 25.8 people per 100,000. The point is that in Virginia people buy guns legally and don’t slaughter each other with them the way they do in New York and Washington, even though both cities have strict gun control laws and Virginia has virtually none.

Under anarcho-tyranny, government fails to enforce the laws and perform the functions it has a legitimate duty to enforce and perform, while it invents laws and functions it has no legitimate duty to make or carry out. In such utopias of anarcho-tyranny as New York and Washington, government and the munchkins who run it have virtually given up any pretense of enforcing the law against the killers, muggers, robbers and rapists who haunt the streets. Instead, they devise plea bargains, paroles, therapy programs and dropped charges for hardened criminals and concentrate their energies on such crises as illegal parking and gun ownership.

It ought to be obvious why there is a large market for gunrunners in these cities: There is, quite simply, a demand for guns. There is a demand for guns for two reasons. First, anarcho-tyranny protects no one, so citizens in crime-ridden areas feel the need to buy and carry guns for their own safely. Second, criminals, especially drug dealers, need guns to conduct their own businesses.

Unable to take their business disputes to court, crooks have to settle them themselves. If a customer doesn’t pay his bill, if a supplier cheats on an order of crack or heroin, if competitors want to drive you out of your illegal trade, you have to protect yourself. Since, under anarcho-tyranny, illegal commerce of all kinds flourishes because the state ' is unable or unwilling to stop it, it breeds demand for guns.

If, as the munchkin task force wants, Virginia changes its laws to stop quantity gun purchases, or even if it were to outlaw guns as thoroughly (and ineffectively) as the District and New York have, there would still be a demand for  guns and there would still be criminals willing and able to supply that demand—from Canada, the Caribbean, Mexico.

This is because, regardless of what you think about crime and criminals, you have to admit one thing: Crime  flourishes in response to the demand of those who want what it offers. Unencumbered by munchkins (they don’t last long among crooks), crime may lead to anarchy or it may lead to tyranny. But one thing crime doesn’t tolerate is the anarcho-tyranny that ignores what people want and need even as it  smothers the rights as well as the security of the law-abiding.