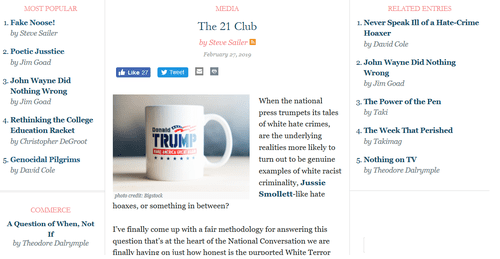 Sailer In TakiMag: First Objective Data On "Are Hate Crime Stories More Likely to be Fair or Fake?"

Here’s my first 4,000 word column in Taki’s Magazine. I went into detail because I’ve finally devised a reasonably objective methodology for answering February’s important national question: Are hate crime stories in the national press more likely to be Fair or Fake?

The 21 Club
by Steve Sailer

When the national press trumpets its tales of white hate crimes, are the underlying realities more likely to turn out to be genuine examples of white racist criminality, Jussie Smollett-like hate hoaxes, or something in between?

I’ve finally come up with a fair methodology for answering this question that’s at the heart of the National Conversation we are finally having on just how honest is the purported White Terror we’ve been hearing about since 2016. …

But what percentage of these press allegations have since been validated?

The methodological issue is, how do we keep advocates from memory-holing contrary data?

My solution is to use The New York Times’ own “This Week in Hate” columns. I let the pinnacle of Establishment respectability take their best shot, curating their own list of hate crimes from across the country. I then evaluate how The New York Times did. …

The contents of “This Week in Hate” were chosen to make it appear that pro-Trump whites were running amok.

With the advantage of hindsight, how well did the NYT do at its self-assigned task?

For the purposes of this essay, I analyzed all 21 incidents in the second (12/6/16) and third (12/13/16) weeks of “This Week in Hate,” looking for pro and con evidence that has accumulated in the 26 months since on the validity of the NYT’s accounts. …

How many of the 21 incidents have resulted in hate-crime convictions? How many have been shown to be a complete hoax? How many are unconfirmed by the justice system but seem plausible? How many unconfirmed occurrences are dubious?

I shall count through the 21 cases rank-ordered from the most valid to the most embarrassing for the NYT.