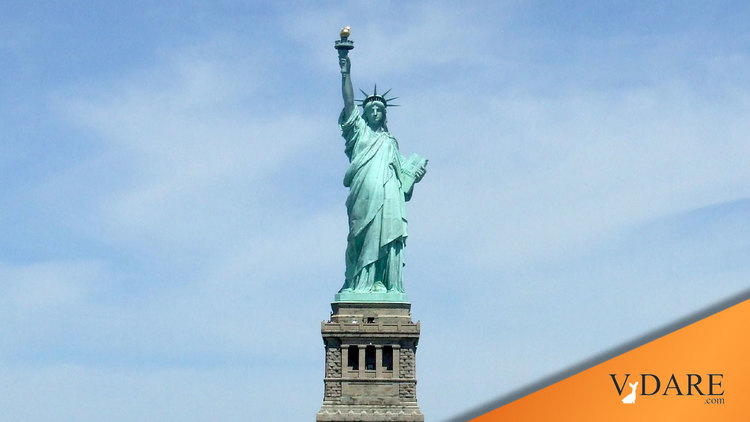 Rush Limbaugh's Teachable Moment On the "Statue of Liberty"

I include those quotation marks in my title above because the statue's actual name is "Liberty Enlightening the World," which is also a better synopsis of the statue's intended message than is the name more commonly used.

Anyway, I was delighted a couple of days ago (Thursday, July 1) to learn that Rush Limbaugh knows [radio show transcript] what the statue is really about, as he educated his huge, coast-to-coast listening audience immediately after Wonderboy's American University obfuscation:

Limbaugh didn't actually use the official title, "Liberty Enlightening the World," but he surely got the story right. (The passage above is a small fraction of what he said on the subject; do read the whole transcript.) And his stab at refuting the widespread misunderstanding of the statue's intended meaning is important, since the hijacked meaning — that the statue supposedly invites the world to move here — is one of the most potent mythical talking points challenging us immigration realists. (I think only two other myths are comparably destructive: 1. The U.S. is a nation of immigrants; and 2) Everyone here, except for American Indians, is an immigrant.)

A year ago, Roberto Suro had an op-ed in the Washington Post (She Was Never About Those Huddled Masses, July 5, 2009) making much the same point as Limbaugh and even suggesting "Let's get rid of The Poem," referring to the Emma Lazurus sonnet, The New Colossus, that's attached to the statue's pedestal and whose words have contributed so much to the submergence of the statue's intended interpretation.

That submergence is implicit in the title of what may be the most in-depth history of the statue, Elizabeth Koed's article A SYMBOL TRANSFORMED: HOW 'LIBERTY ENLIGHTENING THE WORLD' BECAME 'THE MOTHER OF EXILES' [pdf] in the Spring 1992 issue of The Social Contract quarterly [see also].

Near the conclusion of her article, Koed wrote:

In 1986 Liberty turned 100. America celebrated the birthday with an extravagance that surpassed even the 1886 inauguration, but Auguste Bartholdi [the French sculptor who created the statue] would have been confused by the ceremony. His dream could be found, if one looked closely enough, but the elaborate celebrations honored not Liberty Enlightening the World, but, rather, the "Mother of Exiles." It was a media blitz. "For four golden days and gaudy nights, [Liberty] was the still point of a turning, kaleidoscopic world," reported Time. Elaborate ceremonies honored prominent Americans who were naturalized citizens. 16,000 immigrants gained citizenship in a nationally televised event. Ronald Reagan presented Liberty Medals to a dozen distinguished naturalized citizens, including Bob Hope and Irving Berlin. ... Many Americans, including contributors to Time and The New Republic, criticized the event. "Liberty Weekend, some carped, was more about profits than patriotism, more about commerce than comity. The opening-night ceremony was a sentimentalized show-biz tribute that left no cliche unturned."....

The real tragedy of the centennial, however, was not the commercialization of the "Mother of Exiles," but the loss of Bartholdi's original dream of Liberty Enlightening the World.

One brief item in Koed's article suggests that the statue's disastrous effect on American immigration history, an accident of its location near East Coast immigration gateway Ellis Island, was nearly avoided, since at one point the statue seemed destined for Philadelphia, where it would presumably not have been conflated with immigration. And, 115 years later, VDARE's James Fulford would not have come up with his memorable 13-word lament: "We used to have sensible immigration laws, but someone built this damn statue."