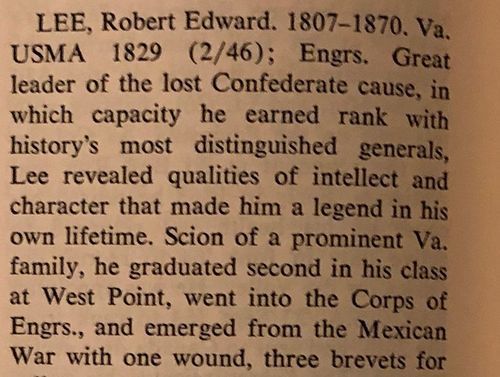 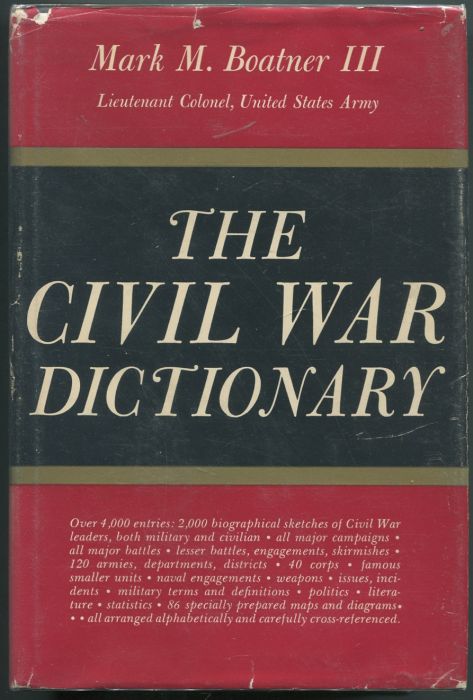 Earlier, I depicted the Current Year view of General Lee in an item from Slate.

After the Civil War, North and South reconciled, and in 1959, this reconciliation could be considered complete, although that's no longer the case.

This non-current year view of Lee is from the Civil War Dictionary (not online, I have a paper copy)published in 1959, and written by a United States Army officer of Southern antecedents, Mark M. Boatner III, while he was a Military History professor at West Point:

LEE, Robert Edward. 1807-1870. Va. USMA 1829 (2/46); Engrs. Great leader of the lost Confederate cause, in which capacity he earned rank with history's most distinguished generals, Lee revealed qualities of intellect and character that made him a legend in his own lifetime. Scion of a prominent Va. family, he graduated second in his class at West Point, went into the Corps of Engrs., and emerged from the Mexican War with one wound, three brevets for gallantry, and a brilliant reputation.

He was Superintendent at West Point during the period 1852—55. Being in Washington when John Brown made his raid on Harpers Ferry, he was sent to put down that insurrection. On Scott's recommendation Lincoln offered Lee command of the Federal armies 18 Apr. '61. He declined, and resigned two days later to take command of Va. troops.

His first campaign in the field led to failure at CHEAT MOUNTAIN, W. Va., in Sept. He then commanded forces along the South Atlantic coast before being recalled to Richmond. After serving as military advisor to Davis until I June '62, he succeeded the wounded J. E. Johnston in the command of the force that then became known as the ARMY OF NORTHERN VIRGINIA.

For almost three years, with inferior numbers and material resources, he not only frustrated Federal attempts to capture Richmond but also undertook two invasions of the North. One of the most aggressive and pugnacious generals in history, his military successes were due primarily to an ability to determine his enemy's strengths and dispositions, predict his movements, and to maintain the initiative.

His famous cavalry leader, Jeb Stuart, kept him informed of the enemy's activities; his great corps commanders, Stonewall Jackson and Longstreet, were able to execute his audacious plans with speed and skill. After achieving his military masterpiece at Chancellorsville, Lee's army was too weakened by the death of Jackson and dwindling supplies of man power and matériel ever to recover its former combat effectiveness. Furthermore, the Federal armies were increasing in strength and proficiency and competent military leadership was finally being found.

The high tide of the Confederacy was reached when Lee was unable to destroy the Army of the Potomac at Gettysburg and he was forced to retreat into Va. Coming from the simultaneous and equally decisive victory at Vicksburg, Grant assumed command of all Federal armies, formulated an over-all strategic plan, and then proceeded to destroy Lee's Army of Northern Va. in a costly Il-month campaign of attrition. It was not until Feb. of 1865— two months before the surrender—that Lee was given over-all command of all Confederate armies. Accepting the presidency of Washington College, after the war, he served until his death 22 Oct. '70, at the age of 64. (The name was later changed to Washington and Lee University. He is buried there.) R. S. Freeman's four-volume R. E. Lee (1934) is a magnificent biography of this great American.