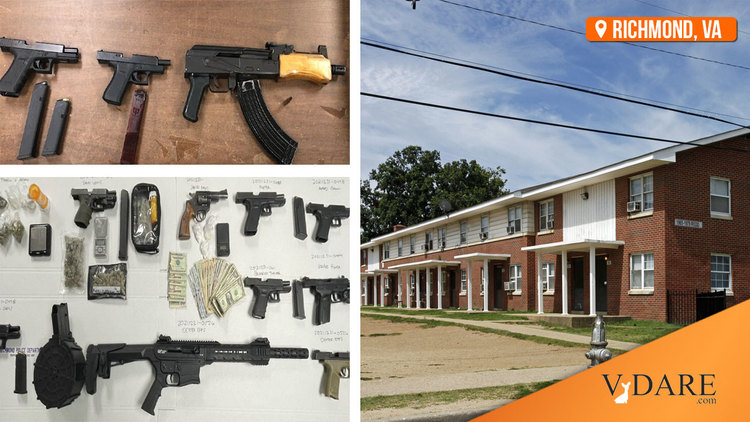 We live in a nation where police actively trying to put behind bars those who are committing crimes plaguing the community is considered a greater crime and sin than protecting the law-abiding.

Richmond police have arrested dozens based on list of potential ‘shooters’, VPM.org, July 25, 2022

Representatives of the Richmond Police Department said last week that they’ve been compiling a list of people suspected of being “shooters.” Those on the list primarily reside in Richmond’s public housing neighborhoods, according to department representatives, who said RPD created the list in an attempt to combat gun violence in the city.

Approximately 100 individuals are on the list, according to  Major Ronnie Armstead. Armstead led the department’s efforts in compiling the list, which includes individuals who don’t have a criminal record. In addition to focusing on people who have shot others previously, RPD also added victims of gun violence and people who “will shoot other people” to the list.

According to Armstead, police decide whether a person “will shoot other people” by investigating their background and connections to confirmed perpetrators of gun violence.

In a follow-up interview Monday, Armstead told VPM News that “the knowledge we have of them, like people talking to us in the community, the involvements they have,” will help RPD make the determination.

According to the ACLU, racial profiling refers to “the discriminatory practice by law enforcement officials of targeting individuals for suspicion of crime based on the individual’s race, ethnicity, religion or national origin.” Data USA, a platform that collects and analyzes government data, reported that Black people make up 60% of people living in poverty in Richmond.

“We’re going after those trigger pullers throughout the city, and especially in the Big Six,” Armstead said last week. [Armstead himself is a black police officer.]

Richmond’s largest public housing neighborhoods are often referred to as “the Big Six” by both public housing advocates and law enforcement. They are Creighton, Fairfield, Gilpin, Hillside, Mosby and Whitcomb courts.

VPM News reached out to multiple current and former residents of Richmond’s public housing neighborhoods for comment on this story, but none said they felt safe discussing the situation on the record.

Officers have been engaged in the initiative to create a list of individuals to observe, called Operation Red Ball, since November, according to Armstead. He said Monday that the department succeeded in its mission by arresting at least 45 residents of public housing across the city, who were among those arrested on suspicion of 188 felony and 138 misdemeanor charges in connection to the operation.

Maj. Richard Edwards, area one commander for Richmond police, said at the Wednesday meeting that the project used data collected by the department between 2017 and 2020 to map areas where crimes involving firearms are concentrated in the city. That data included homicides, aggravated assaults and robberies involving a firearm.

The area around Mosby Court was the most impacted by these gun-related crimes, according to Edwards. Now, Mosby is the primary target of Operation Red Ball, he said.

“These … neighborhoods’ landmass make up 2% of the city’s land, yet accounted for 26% of these violent crimes,” Edwards said.

So far, the officers working on Red Ball have identified a total of 40 people as potential “shooters” in Mosby Court and arrested at least 22 individuals on the suspicion of various felonies and misdemeanors, Armstead said at the RRHA meeting. He also said another 30 individuals in Creighton and Hillside courts, which also were flagged as hotspots for gun-related crimes, are being focused upon in the operation. At least 23 of those people have already been charged, Armstead said.

About 30 additional people have been included on the list. Law enforcement officials didn’t specify the areas where they lived, but indicated that some of the individuals reside in other Richmond public housing neighborhoods.

Operation Red Ball is trying to make life better for the law-abiding citizens of Richmond, Virginia, and all of those arrested have been black from the almost exclusively black public housing in the city. But it doesn’t matter: it’s racist and racial profiling to try and make life better for the citizens of Richmond, if it means arresting black people.

You can have either liberty (and safe streets) or the Civil Rights Act of 1964. One or the other, because the former demands calling anything the state does to make streets safer a “racist” act because of the disparate impact it has on black people.