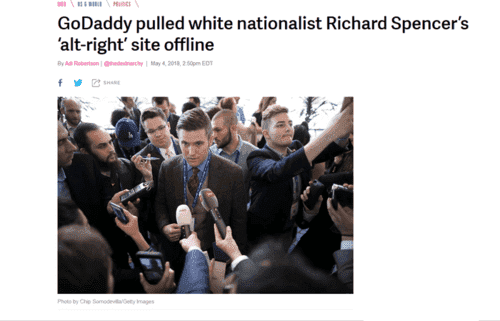 Richard Spencer's website, AltRight.com, was taken off the web by registrar Go Daddy. [GoDaddy pulled white nationalist Richard Spencer’s ‘alt-right’ site offline By Adi Robertson, The Verge, May 4, 2018] This was done at the request of Lawyers' Committee for Civil Rights Under Law, which is headed by black lady lawyer Kristen Clarke, on the grounds that Spencer was "encouraging violence."

Here she is gloating about it:

BREAKING: We shut down Richard Spencer's Altright website. We will continue using every tool in our arsenal to confront white supremacists, the alt-right & those who incite violence and hate in our country. We applaud @GoDaddy for heeding our call and pulling the site. pic.twitter.com/1gU2ZOlNXN 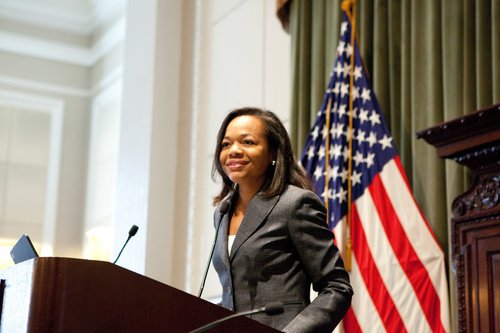 I don't believe, even if someone on the website called for violence against invading illegals, as you will see in the lawyer's letter above, that they did anything half as bad as is done by the New York Times and Washington Post, both of which call for various unnecesary wars, which are much more violent.

Other examples of violence-encouragers would be Black Lives Matter and the NAACP, which support riots, and focus heavily on helping death penalty eligible killers literally get away with murder—if they're black.

Speaking which, during the Baltimore Riots, the Atlantic's Ta Nehisi Coates wanted more rioting. [Ta-Nehisi Coates Criticizes Calls For Nonviolence In Baltimore, NPR, All Things Considered, May 1, 2015] 113 police officers were  injured in that rioting. Should that cause the Atlantic to be shut down, or should we shut down "All Things Considered"?

Ms. Clark, pictured right, was formerly involved in what we refer to as a "Minority Occupation Government"—she was a "Civil Rights" enforcer for New York State.

Former New York State Attorney General Eric Schneiderman has resigned because several of his ex-girlfriends said he beat them.

What this New York Post headline represents is both more violence and worse "racism" than most members of the Dissident Right ever engage in. I'll be interested to hear what Ms. Clark has to say about it. 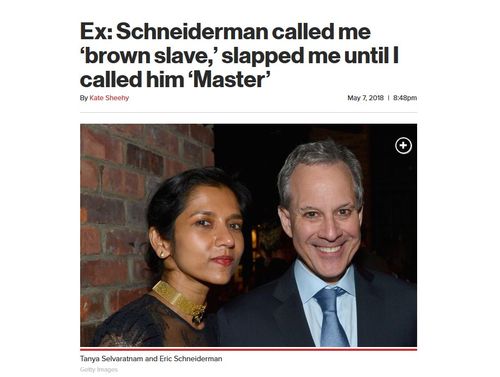