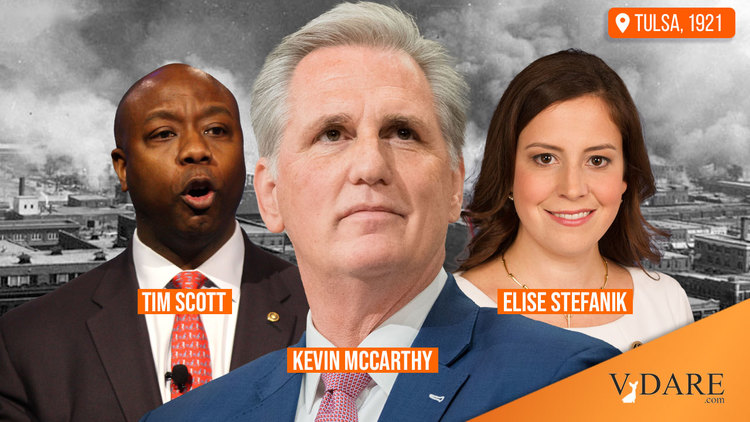 Related: The Race Riots A Hundred Years Ago (Including Tulsa) Were Almost Always A Reaction To Black Crime

Leading Republicans made sure to issue their required submission to the Tulsa myth this week.

100 years ago a thriving community was burned to the ground in an act of racist hatred.

Today we remember the lives lost, and reflect on the progress our country has made in becoming a more perfect union. #TulsaMassacre

Today marks the 100th anniversary of the #TulsaMassacre – a racist, horrific attack on a thriving African-American community.

In the century since, America has made significant progress, but we must continue to work towards prosperity & opportunity for EVERY American.

A century ago, one of the most thriving Black neighborhoods in American history was devastated. We remember these families, churches, and businesses of the Greenwood district who once flourished in economic prosperity.

This is pretty pathetic for the white party to pedestal a day meant to inspire anti-white racism. As Robert Hampton at Counter-Currents writes:

This week marks the 100th anniversary of the Tulsa race riot. It’s no longer called a “riot,” but a massacre or pogrom in mainstream discourse. America’s history is filled with race riots; we just experienced a rash of them last year. However, the only one we’re supposed to remember is Tulsa. The Tulsa riot now forms a core part of lib American mythology. We apparently owe blacks so much after we burned down “Black Wall Street” and murdered hundreds of innocent non-whites [The Tulsa Myth, by Robert Hampton, Counter-Currents, May 31, 2021].

Hampton does an adequate job of correcting the lies and exaggerations surrounding this event, such as the claims that 300 died in the “massacre.”

The authorities counted 36 dead in 1921; 24 blacks and 12 whites. A 2001 state commission found 39 people that could possibly be claimed as riot fatalities, making it 26 blacks and 13 whites. It’s hard to claim the violence was a “race massacre” when the supposedly non-violent innocents were responsible for a third of the deaths. Yet, blacks and official historians claim far more died than the official numbers. That’s led to a number of excavations to find the mass graves of the hundreds of nameless corpses. So far, the excavations have found nothing. Last year, media outlets claimed researchers found a mass grave in a black cemetery. But they only found 12 coffins and it’s unclear when those coffins were buried. If hundreds died, shouldn’t it be easy to find their final resting place? And wouldn’t there be some kinds of records for all these people who suddenly vanished in the summer of 1921? Why just records for 39? What happened to the other 261 alleged victims?

But apparently Republican leaders don’t want to hear the truth about Tulsa. They prefer to embrace it, even if it increases support for reparations and anti-white violence. They care more about impressing the media than defending their own voters.