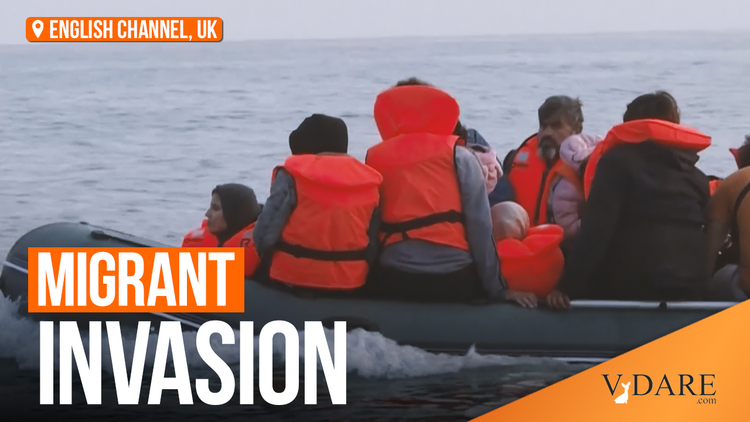 On Sunday came happy news from the U.K.: Border Force fears that the number of migrants making Channel crossings will nearly double from 45,000 to 80,000 this year, by Glen Owen and Claire Ellicott and Abul Taher, The Mail on Sunday, January 21, 2023.

This means some 5,000 people crossed since I reported the Year to Date number on November 1st in Crisis In The English Channel: Nearly 1,000 Invaders Cross In Single Day. I noted then that there were supposedly only 8,147 boat invaders in 2020.

Most likely the Border Patrol has no idea how fast the People Smugglers can expand their business. That is effectively the only restraint on invasion growth. However, they do have a good grasp on the dynamics:

A Border Force source said: ’There is no limit to the number of people who want to come to the UK illegally…

Exactly the same of course applies to the U.S.

In both blogs, the elected officials quoted seem concerned only to find ways of camouflaging the influx. The favored stratagem is new legal immigration channels.

But in Sunday’s story, The Mail does supply significant information:

…former Cabinet allies of Boris Johnson have claimed to the MoS that, when he was Chancellor, Mr Sunak blocked a £200 million plan to help tackle the problem by paying for detention facilities for asylum seekers…

A source said: ’He never bothered to attend a single meeting of the small boats task force. He wanted asylum seekers to be “dispersed into the community“, but that made it impossible for them to be tracked, and many just disappeared.’

In other words, the U.K. has a Prime Minister disinclined to obstruct immigration, probably for heritage reasons. I raised this problem during the Johnson Premiership in Is Boris Johnson’s Home Secretary Priti “Daughter Of Refugees“ Patel Likely To Do Anything To Stop The Invasion Of Britain?

One big question about this humiliating scandal continues to puzzle me. It is said the immivaders pass through the wealthy welfare states in Western Europe, determined to get Britain, because the benefits there are better. Why not simply cut back benefits to this category of people to below the European levels?

(AP neglected to say that 12/2022 saw the highest monthly inflow ever.)

Why are these two Governments suspending border enforcement and accelerating illegal immivasions both at the same time?

Have they received orders from Davos?