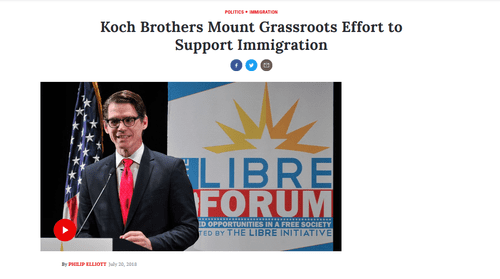 Despite trailing in the polls and with little enthusiasm among the base, Republicans continue to complacently sleepwalk into the midterm elections. In contrast, there is real energy and enthusiasm on the Left.

Her victory fed a flame that was already beginning to burn brighter. The [Democratic Socialists of America] DSA’s paid membership has hovered around 6,000 in the years before Trump’s election, said Allie Cohn, a member of the group’s national political team.

Even in deep-red areas, Americans are tired of low wages and paying too much for health care. So what is the solution of the Koch Brothers, the Republican superdonors? Import more Third Worlders who will vote for socialism and reduce wages.

As the son of Mexican migrant workers and a veteran of the George W. Bush Administration, Daniel Garza has been frustrated by President Donald Trump’s hard-line approach to immigration.

To push back on it, he’s revving up a grassroots effort to lobby Congress, backed by the billion brothers Charles and David Koch.

As head of the conservative mega-donors’ LIBRE Initiative aimed at Hispanics, Garza will be organizing five public rallies in the next week aimed at shaking loose a congressional stalemate on immigration, highlighting yet another looming deadline for courts to decide how to handle children who came to the country illegally...

Leftists, no matter how extreme, always enjoy wealthy backers making sure they can organize and build real institutions. In contrast, rightists have to work hard to overcome the donors that are ostensibly "on their side." The sociopathic short-sightedness of the Koch Brothers risks destroying the entire country, as well as the Republican Party, as it is precisely by serving the interests of people like them that the GOP is turning capitalism itself into a dirty word. Yet rather than recoginizing the threat, the Koch Brothers want the GOP to double down on governing as a party of the donor class. This strategy can't win, but if they can force the GOP to follow, the Koch Brothers will ensure the Republicans (and President Trump) will lose.

There is one consolation if the Koch Brothers get their way. The Third Worlders they love so much will still consider them just more white racists and confiscate their wealth.