Press and Pols Bravely Support Free Speech in Theory, but Dangerous Cartoons Not So Much

Theres been a lot of bravado about free speech following the Charlie Hebdo massacre in Paris. The President was one of the worst, remarking:

The fact that this was an attack on journalists, attack on our free press, also underscores the degree to which these terrorists fear freedom of speech and freedom of the press. But the one thing that Im very confident about is that the values that we share with the French people, a belief a universal belief in the freedom of expression, is something that cant be silenced because of the senseless violence of the few.

Obama tried to sound brave about free speech but nevertheless failed to name the killers as jihadist Muslims following the guidelines of the Koran to slay the infidel. Does he think he is fooling anyone about the nature of the perps?

Mark Steyn pointed out the similar hypocrisy of the media for not printing the Charlie Hebdo cartoons, which are the heart of the matter. Dense prose may be overlooked by the hostiles, but simple cartoons can be understood by anyone, regardless of language or education. The media speaks broadly in support for free speech but they are not willing to take the heat to defend it by printing dangerous images.

MARK STEYN: Yes, they were very brave. This was the only publication that was willing to publish the Muhammad — the Danish Muhammad cartoons in 2006 because they decided to stand by those Danish cartoonists. Im proud to have written for the only Canadian magazine to publish those Muhammad cartoons. And its because The New York Times didnt and Le Monde in Paris didnt, and the London Times didnt and all the other great newspapers of the world didnt only Charlie Hebdo and my magazine in Canada and a few others did. But they were forced to bear a burden that should have been more widely dispersed.

I see all these teary candle-lit vigils and everyone claiming suddenly to be for freedom of speech. I think one consequence of this is a lot of people will retreat even further into self-censorship. The New York Daily News wont even show it dishonors the dead in Paris by not even showing properly the cartoons; they pixilated Mohammed out of it so it looks like Mohammed is in the witness protection program, but they left the hooked nosed Jew in, and that exactly gets the double standard here. You can say anything about Christianity, you can say anything you like about Judaism, but these guys, everyone understands the message that if you say something about Islam these guys will kill you, and we will be retreating into a lot more self-censorship if the pansified Western media doesnt man up and decide to disperse the risk so they cant kill one small, little French satirical magazine. Theyve gotta kill all of us

The fact that [the major media] wont even show you them after people have been killed for them shows that we are actually retreating; the media which congratulates itself on its bravery is one of the most tedious institutions for handing out awards for its bravery far more than fireman or soldiers do the fact that they didnt even have the courage to show these cartoons after they became a news story is why these brave men at Charlie Hebdo had to bear the burden almost single-handed.

I looked around some to find any examples of newspapers printing Hebdo cartoons. I found one in Newseum.org (which posts front pages) of a Berlin daily which has an assortment. The headline translates to Massacre in Paris Attack on Freedom. 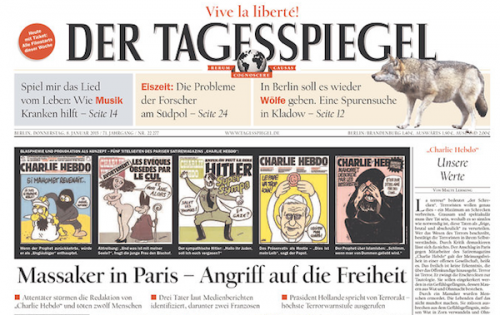 Another item from Berlin showed up on Twitter late Tuesday: 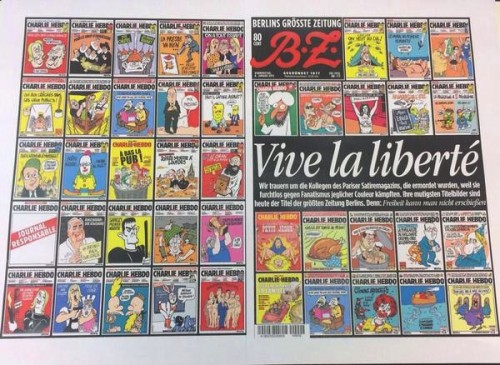 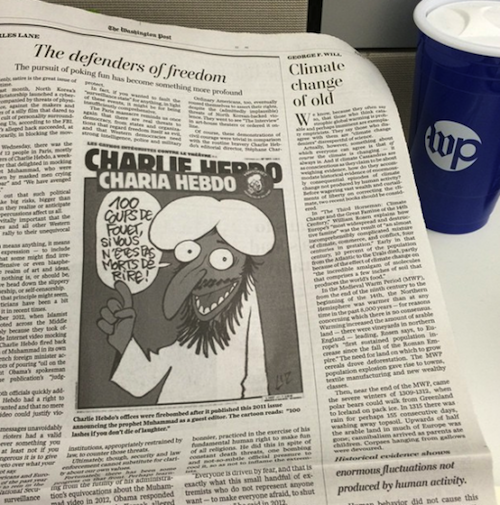 So there are a few exceptions that run counter to Steyns poor opinion of the print media.