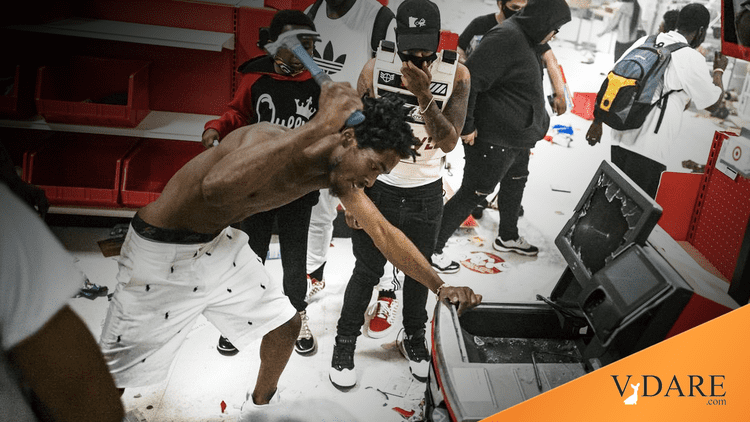 “The colored races are not pacifists. They do not cling to a life whose length is its sole value. They take up the sword when we lay it down. Once they feared the white man; now they despise him.”—From Decline Of The West, by Oswald Spengler

Earlier this week, Twitter censored the President of the United States because he tweeted this:

But the censorship was of little consequence, because per usual, Mr. Trump is barking but not biting [“The Tragedy of Trump,” by Gregory Hood, American Renaissance, November 16, 2018]. Rioters, looters, arsonists, terrorists, and thugs are destroying cities across the country. Neither the police nor the National Guard appear to be opening fire on these barbarians, but they should.

Raging fires threaten innocent lives, looters assault citizens who stand in their way, and the de facto creation of “consequence free zones” invites only more chaos, death, and destruction. Reports are coming out that cities say they can only do so much because there are not enough police and guardsmen to control the enormous violent mobs [“How to Stop the Rioters,” by AmRen Staff, American Renaissance, May 30, 2020].

The solution to that is to start opening fire—with real ammunition, not beanbags or the like—at all groups of people violating curfew and refusing to disperse. Those loitering around burning buildings should get the same treatment. Officers getting pelted with rocks, bottles of urine, and worse, should draw their guns and shoot.

This will put an end to the madness. As Jared Taylor noted during the race riots in 2015, historically, America has quelled riots with full metal jackets:

The morning after the San Francisco earthquake of 1906, Mayor Eugene Schmitz put up notices all over town warning that: “The Federal Troops, the members of the Regular Police Force and all Special Police Officers have been authorized by me to KILL any and all persons found engaged in Looting or in the Commission of Any Other Crime.”

Reports of the number of looters killed vary from a dozen to a hundred.

In December, 1913, the San Antonio River overflowed, and there was serious flooding in central Texas. The order issued to the state police was, “Shoot all looters, and shoot to kill.”

There was another famous “shoot to kill” order in 1977, after flooding in Johnstown, Pennsylvania. When Mayor Herb Pfuhl heard reports of looting he told police to kill looters, and as soon as the word got out, the looting stopped. . . .

Few people remember that when Hurricane Katrina devastated parts of Mississippi there was very little looting. Governor Haley Barbour explained why: “The reason, I think, was because I said people could shoot looters. I think it was a real deterrent.” Mississippi does not have restrictive gun ownership laws, and many citizens are armed [We Used to Shoot Looters, by Jared Taylor, American Renaissance, April 28, 2015].

Unfortunately, the President cannot promise that charges will not be pressed against those who pull the trigger. What he can do, however, is promise a full presidential pardon for anyone who does, and who ends up convicted of anything. Mr. Trump should make this promise—to soldiers, policemen, guardsmen, and vigilant citizens—on Twitter. If the social media platform censors his tweet about it, or deletes his account entirely, he should migrate to the uncensored alternative to Twitter, Gab, and encourage all Americans to do the same.

Morality is whatever preserves civilization. We must take decisive action now, for “ourselves and our posterity.”