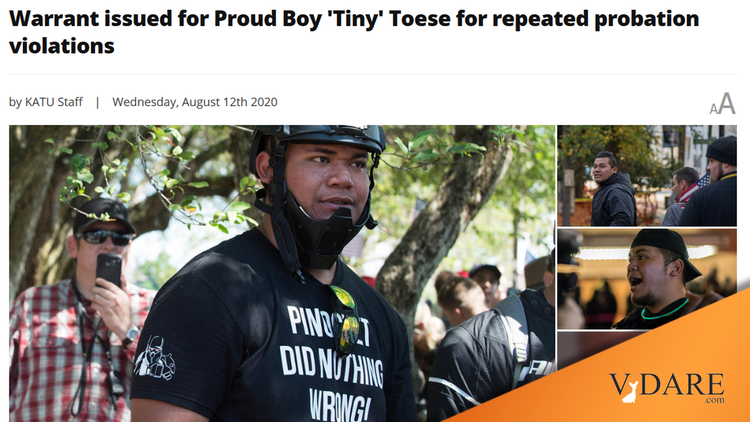 Portland Finally Caught One of the White Supremacists Causing All the Trouble: Tusitala Toese VANCOUVER, Wash. – A 24-year-old right-wing activist known for brawling in the streets of Portland during political protests had a warrant issued for his arrest last Friday for violating the conditions of his probation.

Tusitala “Tiny” Toese of Vancouver, Washington was on a supervised probation for a fourth-degree assault charge out of Multnomah County, Oregon. …

According to court records, the probation violations started in mid-June when his supervising officer started getting emails and calls saying Toese had “participated in an assault that occurred outside of the Capitol Hill Autonomous Zone (CHAZ) in Seattle.”

Based on videos of the assault and other clips form that time, Toese was confirmed to have been in the CHAZ area. He was later arrested. …

According to court documents, Toese violated the agreement that he only travel between his work and residence on several occasions, and also let his GPS monitor lose its charge.