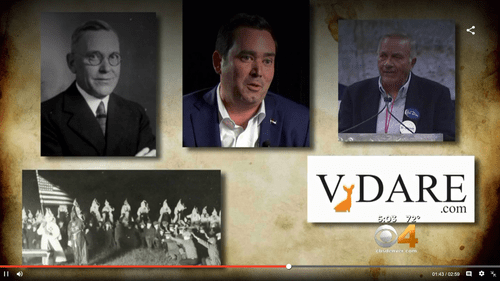 Peter Brimelow talked to Chuck and Julie in Colorado on 710 KNUS. Their podcast is here, or you can listen below.

What they were talking about is this: Colorado Gubernatorial candidate Walker Stapleton had not yet denounced his own great-grandfather, who was a respected member of the community, and also active in the Second Klan of the 1920s.

Stapleton’s ancestral roots run deep in Colorado. The family has a history of public service dating back more than a century, something Stapleton touted in a campaign ad for treasurer.

But Benjamin Stapleton’s legacy also includes a dark chapter. He was a high ranking member of the Ku Klux Klan in the 1920’s, which had infiltrated both parties and virtually all levels of government.

Stapleton says he’s not his great grandfather — he was born 25 years after the elder Stapleton died — but he hasn’t expressly denounced Benjamin Stapleton’s involvement in the KKK, until now.

The problem with having Stapleton denounce his perfectly respectable grandfalther--five times mayor of Denver--is that his past isn't that dark.

The "Second Klan" was neither the Reconstruction-era Southern resistance to Northern occupation, nor the 1960s anti-Civil Rights Movement organization, but something closer to a fraternal organization, and it had millions of members. This was explained in the Atlantic in December, 2016.

But the Klan was easily at its most popular in the United States during the 1920s, when its reach was nationwide, its members disproportionately middle class, and many of its very visible public activities geared toward festivities, pageants, and social gatherings. In some ways, it was this superficially innocuous Klan that was the most insidious of them all. Packaging its noxious ideology as traditional small-town values and wholesome fun, the Klan of the 1920s encouraged native-born white Americans to believe that bigotry, intimidation, harassment, and extralegal violence were all perfectly compatible with, if not central to, patriotic respectability.

When Bigotry Paraded Through the Streets

A century ago, millions of Americans banded together in defense of white, Christian America and traditional morality—and most of their compatriots turned a blind eye to the Ku Klux Klan.

There are millions of members of the 1920s Klan buried in American cemeteries. Are you going to dig them all up? There are tens of millions of their descendants in America today. Are they all going to be asked to denounce their great-grandparents?