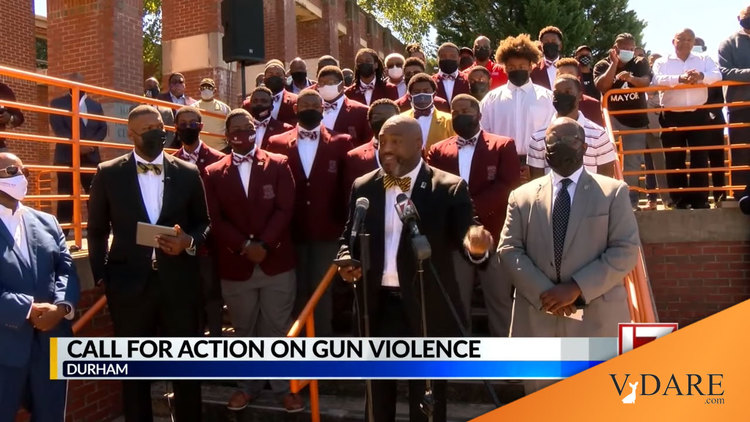 Persistent Black Gun Violence in Durham, NC Requires Creation Of “One Thousand Black Men” Group  To Convince Blacks To Stop Shooting Each Other

Ask yourself: has this ever been necessary for the white community in America?

After you've answered that, realize that these kinds of groups of blacks rallying to “stop the gun violence” happen in virtually every city in America with a black population.

A community group known as One Thousand Black Men, or OneKBM, gathered outside the Hayti Heritage Center Friday to take a stand against gun violence. This comes as the city has seen a spike in crime.

Leonardo Williams, one of the group’s co-founders, says their goal is to curb gun violence and change the trajectory of young Black men. Their efforts include advocacy, support, economic development and intervention.

“Imagine if we had a thousand Black men on the ground,” Williams said. “Imagine if every young man of color had someone to hold their hand and say, ‘I got you. I have your back. You don’t have to resort to the streets. I can help you get into college. I can help you find a job.’”

During Friday’s event, they called on elected officials to create an immediate plan of action in order to end gun violence in the city. They also asked leaders to help fund community resources that are already established in the city.

Members of OneKBM include students from N.C. Central, working professionals from all sectors as well as religious leaders. The organization is actively recruiting more people who want to join their efforts. Their first meeting is happening next month.

Please just give us more tax dollars and we promise we’ll stop shooting each other.

It’s all so tiresome.