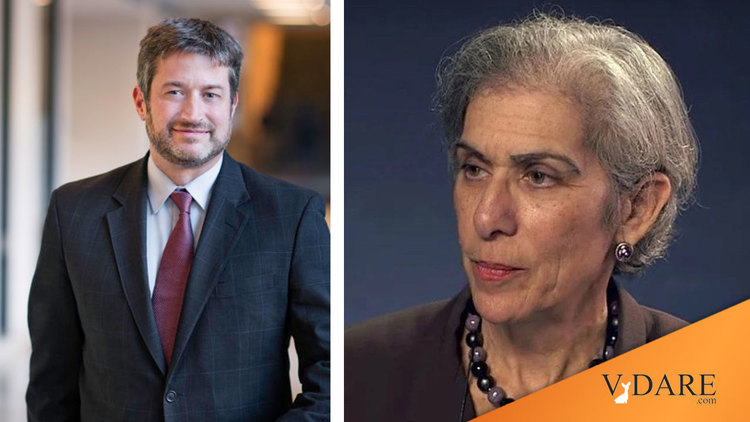 Earlier: John Derbyshire: Amy Wax, “National Conservatism,” And The Futility Of Nuance. Why Not Race Realism And An Immigration Moratorium?

The largest bulk of what lawyers do is write contracts, which are like computer programs written in modern English with much key vocabulary taken from medieval Anglo-French words. Hence, lawyers, like computer coders, need to be hardworking and smart.

Thus, law schools don’t much worry about holistic admissions. They care about undergraduate GPA and LSAT scores. This makes for an extreme hierarchy of law schools, with Yale at the top followed by Harvard and Stanford.

The system tends to work extremely well in the sense that no other law school has figured out a way to outsmart the system. Year after year, Yale, Harvard and Stanford get the top students, objectively speaking, and year after year, Yale, Harvard and Stanford grads are most likely to get the glittering prizes in the legal profession. Law schools are not run by stupid or unambitious people, but no law school has yet figured out a way to take its lower ranking admittees and transform them through the quality of the education it gives them into higher achieving lawyers.

Because blacks and, to a lesser extent, Hispanics are, on average, less hardworking (as measured by college GPA) and less intelligent (as measured by LSAT) than Asians and whites, elite law schools also consider race, letting in black students they wouldn’t imagine taking if they were Asian or white.

But of course this has inevitable consequences, such as black students performing less well on average in law school and in professional life, tending to feel anxious and resentful over their being outcompeted by Asians and whites, and falsely blaming white people for their shortcomings.

This is especially a problem for elite law schools just below the level of Y-H-S, like Penn. There are plenty of really smart whites to go to Penn, but the really smart blacks go to Y-H-S, so the racial gap is particularly evident at places like Penn.

At the U. of Pennsylvania Law School, Professor Amy Wax has been tenured since 2001. But the dean of the law school wants to take her tenure away because she keeps mentioning the existence and implications of affirmative action.

Ruger says that BIPOC students worry that they will be victimized by Wax’s animus without providing evidence of Wax victimizing them due to animus.