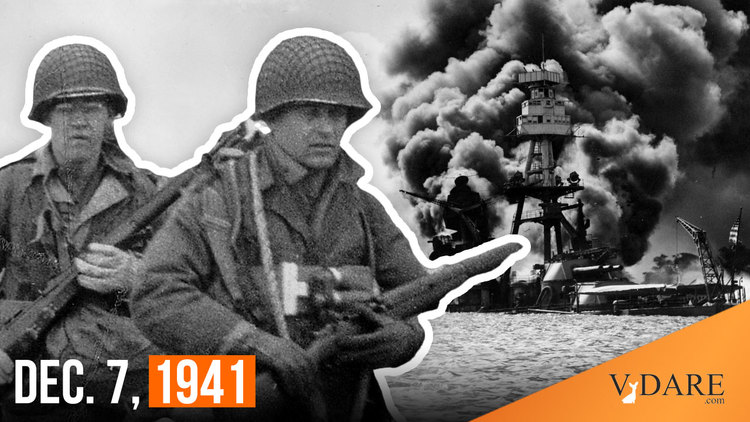 Pearl Harbor At 80: Remembering An America That Fought Back

Today is the 80th Anniversary of the Japanese sneak attack on Pearl Harbor which killed 2,400 Americans and sank many battleships, including the USS Arizona. If you visit the Arizona Memorial in Hawaii, which straddles the sunken ship, you are over the last resting place of 1,102 of the 1,177 sailors and Marines murdered on that day, bodies that couldn't be recovered.

Almost all the survivors of Pearl Harbor are dead of old age by now.

It was a different America then.

Young people today study this as The War Of The Japanese Internment. Obama's pastor Jeremiah Wright—a U.S Navy veteran—considered it The War When White People Bombed Hiroshima For No Reason.

The Americans of 1941 regarded it as a war of revenge on Japan—a response that had something of a racial component. (Not as big a racial component as the original Japanese attack, of course—no one in America, white or black, was as ethnocentric as the Japanese remain today.)

Here's Red Foley's "Smoke On The Water" (lyrics)—as you listen to it, think of what the MSM would say about someone who wrote a song like it after a Muslim attack.

Things have changed—in 2001, American liberals responded to 9/11 by forming Societies For The Protection Of Enemy Aliens—but I wrote in 2016 that the election of Donald Trump in 2016 shows that the old spirit is not dead.

Here are some of the things we've written about Pearl Harbor and related topics:

Remembering Pearl Harbor means also remembering things like the Battle Of Midway and  the payback at Hiroshima: