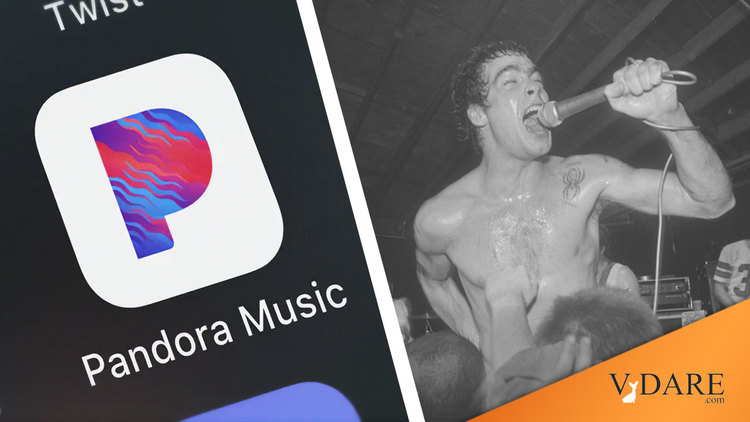 The other day while listening to one of Pandora's alternative stations, a "curator" came on between songs to announce to the listeners that he doesn't like the genre's whiteness. So, he's going to bump white artists from his songlists in favor of "artists of color."

So much for my hope of hearing Black Flag's "White Minority" or Minor Threat's "Guilty of Being White," much less Skrewdriver's "Free My Land."

But I date myself. My mosh pit would smell like Aspercreme.

"Alternative," decades ago, had a workable definition: it was rock you didn't hear on Top 40 commercial radio. Its relative, "indie," meant a small record company not owned by one of the giant labels.

But vinyl gave way to CDs, which in turn gave way to a controlled stream of digital music. As a graying Gen X'er, I wonder how many music fans in their 30's own a single CD. Records, maybe, for the retro appeal.

Nowadays, "alternative" has a less-clear meaning. Is it just edgier? Less popular overall?

It does not mean: hip hop, rap, Latino, jazz. This clues us in to why "alternative" will be hauled before the Wokequisition, just like country music.

“The Unbearable Whiteness of Indie”… in Pitchfork. 🤣

An oldie but a goodie. https://t.co/KAhg8O1gsf

Because the truth is that "alternative" is marvelously white. The aforementioned punk songs were bona fide white resistance. Black Flag and Minor Threat weren't overt "white power" bands, but much of the same energy: shaved heads, boots, tattoos, shirtless sweatiness, screaming. Skrewdriver, a British band, was straight-up NSFW-W (Not Safe For Work-White).

More modern punk echoes a lot of this.

Meanwhile, stuff like The Smiths and The Cure were mopey and artsy in a way that would probably disgust black people and perhaps many Hispanics, though Morrissey seems to have a curiously strong following in Mexico.

"However it happened, #Mexico did fall in love with #Morrissey. And Morrissey has made sure to give Mexico some love in return." #HappyCincoDeMayo to our friends who celebrate it <3https://t.co/6K2vAxCUSv

Digitally-streamed music means that the same anti-white cultural forces that have a stranglehold on social media and streaming television also control what music we listen to. It's almost like we need to set up our own country or something just so we can listen to Franz Ferdinand without feeling racist.