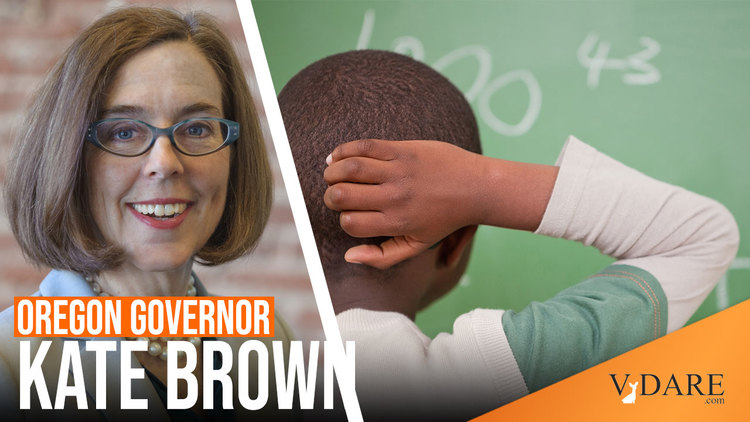 What happens when Western Civilization waves the white flag, ushering in a new era dominated by what’s best for black and brown students (standards dictating the advancement or maintaining of civilized society be damned)?

An Oregon high school diploma does not guarantee that students who earned it can read, write or do math at a high school level.

Governor Kate Brown dropped the requirement that students demonstrate they have achieved those essential skills by signing Senate Bill 744 into law. She declined again Friday to comment on why she supported suspending the proficiency requirements, reported OregonLive. The bill was not entered into the legislative database until July 29, a departure from the standard practice of updating the public database the same day a bill is signed. Charles Boyle, the governor’s deputy communications director, said the governor’s staff told legislative staff the same day the governor signed the bill.

He added: “Leaders from those communities have advocated time and again for equitable graduation standards, along with expanded learning opportunities and support.” Lawmakers did not pass any significant expansion of learning opportunities or support for black, Indigenous and students of color during the 2021 legislative session.

Democrats in the legislature overwhelmingly supported ending the longtime proficiency requirement, while Republicans criticized it for lowering academic standards. A couple of lawmakers crossed party lines on the votes.

Oregon education officials have long insisted they would not impose new graduation requirements on students who have already begun high school. New requirements would not take effect until the class of 2027. That means at least five more classes could graduate without demonstrating proficiency in math and writing.

Much of the criticism of the graduation requirements was targeted at standardized tests. Oregon, unlike many other states, did not require students to pass a particular standardized test or any test at all. Students could demonstrate their ability via five different tests or complete an in-depth classroom project judged by their own teachers.

No notification went out regarding the governor’s signing of the graduation bill.

How dare white people have proficiency scores at reading, writing, and mathematics beyond what Blacks, Latinos, Latinas, Latino, and other non-whites can replicate…