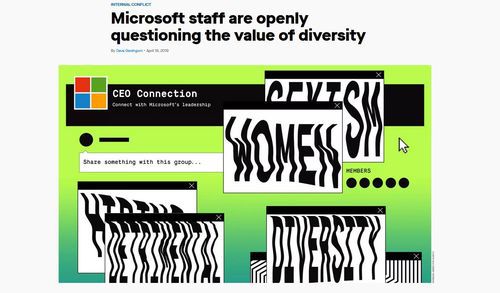 Microsoft staff are openly questioning the value of diversity
By Dave Gershgorn April 19, 2019

Some Microsoft employees are openly questioning whether diversity is important, in a lengthy discussion on an internal online messaging board meant for communicating with CEO Satya Nadella.

Two posts on the board criticizing Microsoft diversity initiatives as “discriminatory hiring” and suggesting that women are less suited for engineering roles have elicited more than 800 comments, both affirming and criticizing the viewpoints, multiple Microsoft employees have told Quartz. The posts were written by a female Microsoft program manager. Quartz reached out to her directly for comment, and isn’t making her name public at this point, pending her response.

“Does Microsoft have any plans to end the current policy that financially incentivizes discriminatory hiring practices? To be clear, I am referring to the fact that senior leadership is awarded more money if they discriminate against Asians and white men,” read the original post by the Microsoft program manager on Yammer, a corporate messaging platform owned by Microsoft. The employee commented consistently throughout the thread, making similar arguments. Quartz reviewed lengthy sections of the internal discussion provided by Microsoft employees.

“I have an ever-increasing file of white male Microsoft employees who have faced outright and overt discrimination because they had the misfortune of being born both white and male. This is unacceptable,” the program manager wrote in a comment later. The Microsoft employees who spoke to Quartz said they weren’t aware of any action by the company in response, despite the comments being reported to Microsoft’s human resources department.

In other words, the Microsoft employees who are the sources for this article are outraged that this woman hasn’t been punished James Damore-style. They aren’t at all interested in what the woman revealed about Microsoft’s discrimination.

… The Microsoft author echoes former Google employee James Damore, who in 2017 wrote a memo that went internally viral at Google, leaning on pseudoscience to argue that women aren’t cut out for the tech industry. …

As the controversy around Google’s firing of Damore illustrated, it can be extremely contentious for companies to wade into disciplining employees for their personal views on such issues.

“HR isn’t trying to enforce the inclusive culture that they’re talking about,” one Microsoft employee who read the latest posts by the program manager and responses to them told Quartz. “HR, Satya, all the leadership are sending out emails that they want to have an inclusive culture, but they’re not willing to take any action other than talk about it,” they said. “They allow people to post these damaging, stereotypical things about women and minorities, and they do nothing about it.”