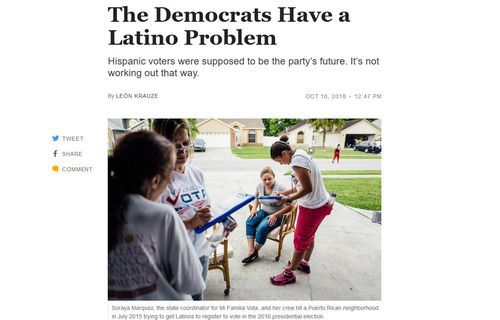 In Slate, a smart Jewish guy from Mexico City explains to gringos that the American Establishment’s political Conventional Wisdom of 2000-2015 — the key to the White House is amnestying Mexican illegal aliens — is silly.

The Democrats Have a Latino Problem
Hispanic voters were supposed to be the party’s future. It’s not working out that way.
By LEÓN KRAUZE

… Then, there is the Hispanic vote. It would seem reasonable to assume that after three uninterrupted years of demonizing, ostracizing, and persecuting the country’s Hispanic immigrants, Trump and his nativist enablers would have hell to pay with Latinos at the ballot box, come November and beyond. Trouble is, they might not. Hispanic voters have become a maddening puzzle for the Democratic Party.

2016 was supposed to be the year America’s great demographic “sleeping giant” would finally awake, shaken out of its slumber by Trump’s rhetoric. Some predicted a massive “We have arrived” moment that would include a surge in voter registration and a dramatic increase in turnout at the polls. A “Latino wave,” an overoptimistic colleague told me, would come ashore and prove that Hispanic voters truly held the key to the White House.

On Election Day, the wave was merely a splash. There were certainly stories of accomplishment, like the Latino vote in Colorado and Nevada, but Hispanics did not reject Trump in the resounding, almost absolute way that, say, black Americans did. According to exit polls, Trump won 29 percent of the Hispanic vote, outperforming Mitt Romney’s tally by 2 points.

Two things have happened since then. First, Trump’s attacks on Hispanics immigrants have reached an astounding degree of cruelty. …

Latinos have not responded in kind. While Trump was enacting his anti-immigrant agenda, Latino voters seemed to have slowly warmed up to the president. In last week’s NPR/PBS/Marist poll, 41 percent of Hispanics approved of Trump’s performance (black Americans? 12 percent). This is no outlier. Another recent poll put Trump’s approval among Latinos at 35 percent. An average of both would put Trump—again, an overtly nativist president—within about 10 points of Barack Obama’s 49 percent approval among Hispanic at roughly the same time in his presidency.

The fact that Donald Trump is viewed in a relatively favorable light by as many as 1 in 4 Hispanic voters should be alarming for Democrats, but it’s not even their biggest problem. That would be turnout.

Latino voters make up about 12 percent of the American electorate, with more than 27 million eligible voters. Those numbers will continue to grow in the coming years. The question is whether Hispanic turnout will increase as well. So far, it doesn’t look promising.