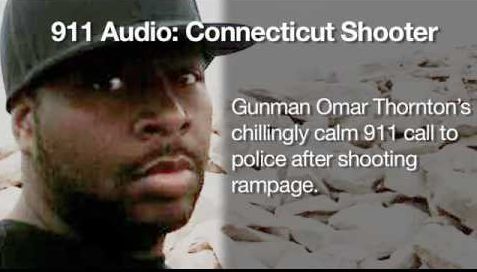 Remember last August when Omar Thornton murdered eight white men, then called them racist? At the behest of a vigilant press, government officials have been diligently investigating the late Omar's charges ever since. In a shocking revelation last Friday, police reported that the victims of the thieving mass murderer didn't deserve to be murdered.

From Reuters via WHNT:

No proof of racism at site of 2010 shooting rampage: police

CONWAY, Mass (Reuters) - There is no proof of systemic racism at a Connecticut beer distributor where a gunman shot dead eight people last year because he said African-Americans were treated badly, a police probe concluded.

Omar Thornton, 34, a driver at Hartford Distributors, a family-owned beer wholesaler 10 miles east of the state capital in Manchester, shot eight people before killing himself in August 2010.

Minutes before the frenzy took place, Thornton, who was black, was fired at a disciplinary meeting for having stolen beer and empty kegs from the company.

Manchester police on Thursday released a 543-page report on its investigation into the killing ...

Police Chief Marc Montminy told a press conference that there had been allegations that Thornton had photographic evidence of racial slurs against him on his cell phone. But Montminy said forensic analysis of the phone showed that "that is not true."

"We also interviewed the other minorities that worked at the facility to see if there was systemic racism within the building, and not only did they not agree with Omar's position but they found quite the contrary," Montminy said. ...

"You probably want to know why I shot this place up. This place is a racist place. They treat me bad over here," Thornton said in a recording of the 911 call. "They treat all the other black employees bad over here too. So, I took it into my own hands and handled the problem. I wish I (could have) got more of the people."

Clearly, our society needs a 543-page report on whether or not Matthew Yglesias was only getting what he deserved.