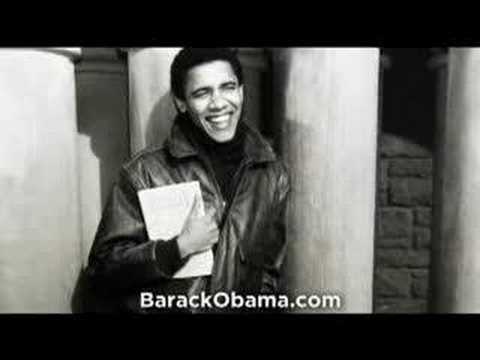 Obama's new 60 second TV spot, entitled "Country I Love," continues his central campaign theme of running for President based on his biography. Unfortunately for Obama, he wrote a 442 page autobiography that shows that much of this commercial is a tendentious distortion of his life story. Fortunately for Obama, the book is too boring to hold anybody's attention.

The new commercial emphasizes his white relatives (Matthew Yglesias says the the title of the ad should be "My Mom's White! And I'm From America!"). It's part of his effort that began in 2004 to promote himself as the promised prince, the long-awaited offspring of a historic marital alliance, who, just as Henry VIII's birth of Lancastrian and Yorkist parents ended the War of the Roses, will end the War of the Races by unifying blacks' and whites' divergent interests in himself.

”I’m Barack Obama. America is a country of strong families and strong values. My life’s been blessed by both.

Huh? He wrote tens of thousands of self-pitying words about how bad his family life was. He only spent one month with his father that he can recall. His mother dumped him twice on her grandparents so she could go back to Indonesia to work on her 1067 page anthropology Ph.D. dissertation on peasant blacksmithing.

I was raised by a single mom and my grandparents.

If he was blessed with such a strong family, why was his mother a "single mom?" Actually, his mother was married about 90% of the time up through his 18th birthday, assuming that you count her bigamous marriage to Barack Sr. as "being married." She just despised her second husband, Lolo, in part for his being too pro-American and too pro-capitalist for her tastes, unlike her beloved pro-socialist first husband (who had abandoned her and little Barack because the New School for Social Research, which had offered a scholarship ample enough to support the three of them, wasn't as prestigious as Harvard — now that's a strong family!)

He attended Hawaii's most famous prep school from 5th grade on and lived mostly in a Honolulu highrise with a fabulous view. But to the extent that it's true that they didn't have much money, it's because he wasn't from a "strong family."

but they taught me values straight from the Kansas heartland where they grew up.

The Chicago Tribune's article "Mother not just a girl from Kansas" gives a much more accurate picture of her Seattle-area upbringing as a leftist, feminist, and atheist who told her high school friends that marriage and children weren't for her, but surprised them all by getting knocked up at age 17 by a 24-year-old married man. He was from the Third World, so I guess that made it okay.

Accountability and self-reliance. Love of country.

Oh, come on ... His mother married two foreigners and spent most of her adult life in foreign countries. She dumped her son on his grandparents twice because she preferred to live abroad without him than in America with him. His mother angrily refused to attend her Indonesian second husband's business dinners with Americans because, as she shouted, "They are not my people" (italics Obama's). She was shattered to discover Indonesia was no longer the anti-American leftwing state she'd heard about, but was now a pro-American rightwing one.

Working hard without making excuses. Treating your neighbor as you’d like to be treated. It’s what guided me as I worked my way up – taking jobs and loans to make it through college. It’s what led me to pass up Wall Street jobs

His "international business consultant" job he got out of college was actually being a copy editor at a low-rent newsletter sweatshop. (By the way, I've never seen much evidence, pro or con, on whether Obama's quantitative skills come anywhere close to his superlative verbal skills. Anybody know? That might explain why he wasn't snapped up by an investment bank when he graduated from Columbia in booming 1983. Judging from the kind of job he accepted, he would have taken a high-paying Wall Street job if anybody had offered him one.)

and go to Chicago instead, helping neighborhoods devastated when steel plants closed.

The intended implication here is that he went to Chicago to help steel workers with names like Stan Grabowski. No, he went to politically organize blacks, and only blacks, to build himself a black power base in a city where blacks had just gotten the powerful mayor's office.

That’s why I passed laws moving people from welfare to work,

In the 442 pages of his 1995 Dreams from My Father, I can't find one word of criticism of welfare.

This is an extremely accurate depiction of his political emphases!

I approved this message because I’ll never forget those values, and if I have the honor of taking the oath of office as president, it will be with a deep and abiding faith in the country I love.

Obama has a deep and abiding faith in Obama.