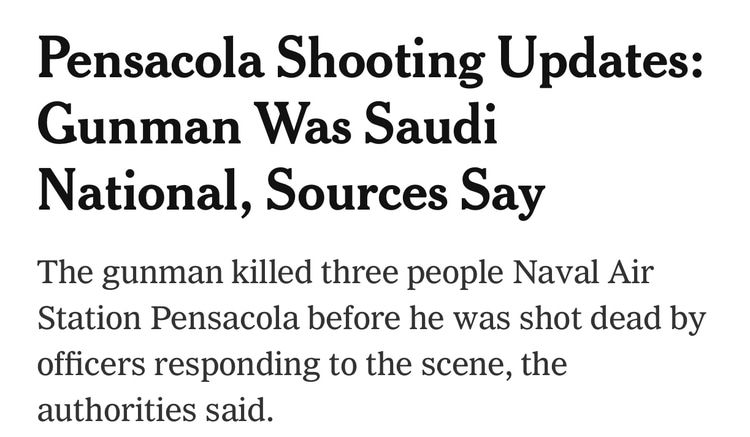 The NYT writes, in a story likely to be updated, that the Pensacola gunman was a Saudi national—who may have been at Naval Air Station Pensacola for "flight training."

Isn't this where we came in on September 11? "Saudi National," by the way, is a typical newspaper avoidance of the word "immigrant."

The gunman was a Saudi national, sources say.

Three people were shot dead early Friday at the Naval Air Station in Pensacola, Fla., and the gunman has been identified as a Saudi national, according to three sources familiar with the investigation.

The authorities have not publicly named the gunman, who was killed by a sheriff’s deputy. Capt. Timothy F. Kinsella Jr., the base’s commanding officer, declined to comment on whether the shooting is being investigated as an act of terrorism. The Pensacola base is known to host international students for flight training.

Two deputies were shot, one in the arm and one in the knee, but are expected to recover, the sheriff said. The base employs more than 16,000 military personnel and 7,400 civilians.