That’s a South Asian name, so I guess when the New York Time assigned her Murray’s imposing Human Diversity: The Science of Gender, Race, and Class to review, they figured she had to be smart at STEM.

Just when the world seems poised to boil over with political rancor and outrage, along comes Charles Murray — right on time — with a new book titled “Human Diversity.”

Yes, that Charles Murray, who in 1994 co-authored “The Bell Curve,” with Richard J. Herrnstein, arguing in two notorious chapters that I.Q. differences between the races were mostly innate and mostly intractable. (They allowed that environmental factors play a part in I.Q., but held that the “balance of the evidence” put a genetic factor of 60 percent “on the low side.”)

… In the years since its publication, the book has been roundly discredited on moral, political and scientific grounds. Reviewing “The Bell Curve” in The New Yorker, Stephen Jay Gould called attention to the authors’ questionable use of statistics

After all, who is a more trustworthy expert on statistics than Stephen Jay Gould?

and cherry-picked data. Peer reviews found shoddy reasoning and mathematical errors (all in service of the book’s thesis). There have been debates about what I.Q. really measures (other than the ability to take I.Q. tests), and whether an individual’s I.Q. is as relatively unchangeable as the authors claimed. …

Outrage has been good to Charles Murray. Far from being the victim of “a modern witch burning,” as the neuroscientist and podcaster Sam Harris has described him, Murray has been able to cloak himself in the mantle of the embattled intellectual, the purveyor of forbidden knowledge, while comfortably ensconced at the American Enterprise Institute, the influential think tank, for three decades. … The violent actions of protesters when Murray appeared at Middlebury College in 2017 were widely deplored. …

Developments in epigenetics, for example — outside mechanisms that effectively turn genes “on” or “off” — are waved away as “hype.” …

The main question is: Why am I asking these questions of Charles Murray? True, the burden of proof is on him to make a case for this “exciting” scientific revolution (whose discoveries just happen to regurgitate some of humanity’s most pernicious, wearying and stubborn stereotypes). But proof is not Murray’s concern. Despite its blizzard of statistics, the book’s most astonishing (and telling) declaration is on the first page. If “you have reached this page” — the first page, I remind you — “convinced that gender, race and class are all social constructs, and that any claims to the contrary are pseudoscience, you won’t get past the first few pages before you can’t stand it anymore. This book isn’t for you.” He continues smoothly: “Now that we’re alone…”

Now that we’re alone. This book is for the believers. Rigorous readers, skeptics, the unindoctrinated — you won’t be persuaded by “Human Diversity,” but why should that matter? You’re not even invited. How’s that for a safe space. How’s that for an orthodoxy.

Here are the first three paragraphs of Human Diversity: 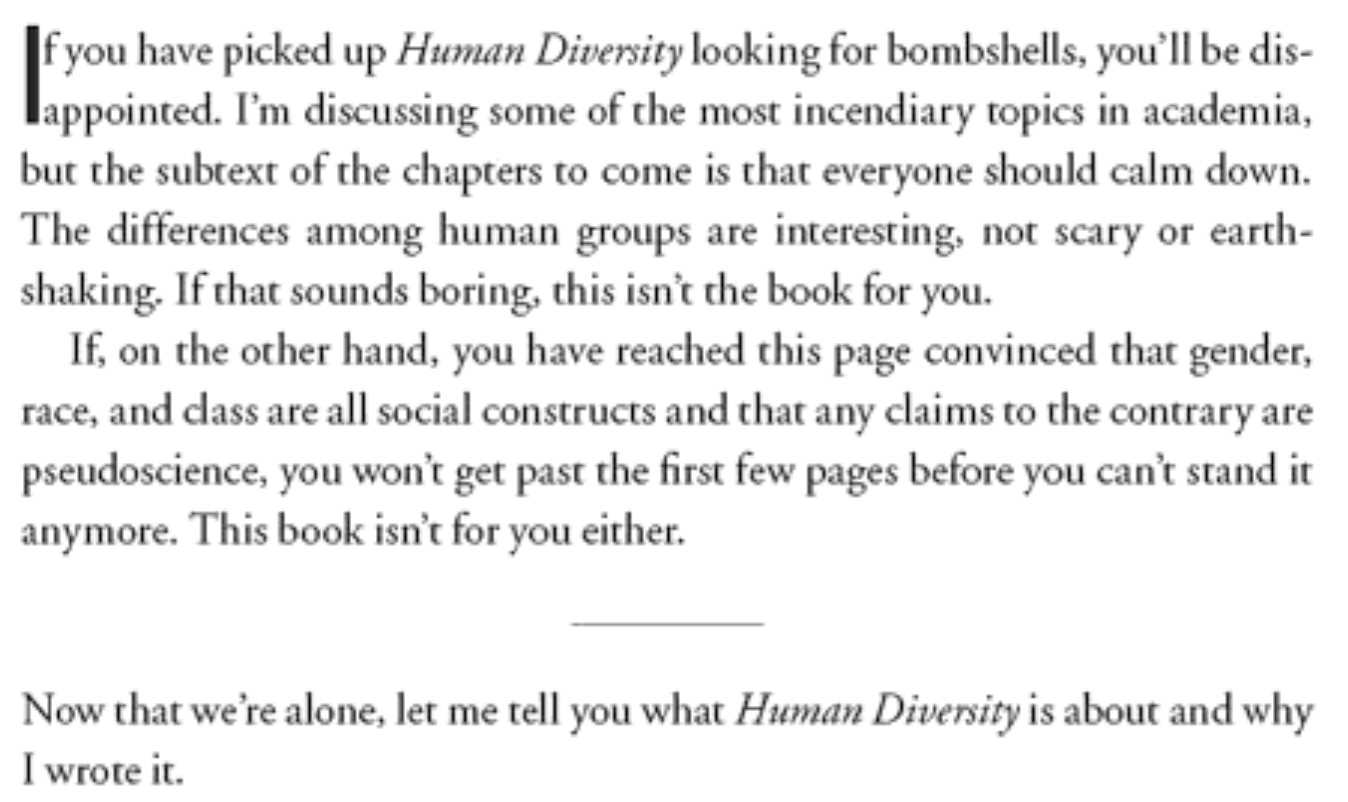 But big props to Ms. Sehgal for reading all the way to the third paragraph in the book she is reviewing. You sure didn’t let Charles Murray slip anything by you by burying it in the end notes.

And congratulations to her for shattering stereotypes about South Asians being good at science.

My suspicion is that Murray read the similar opening to Dave Barry’s 1987 career advice book Claw Your Way to the Top: 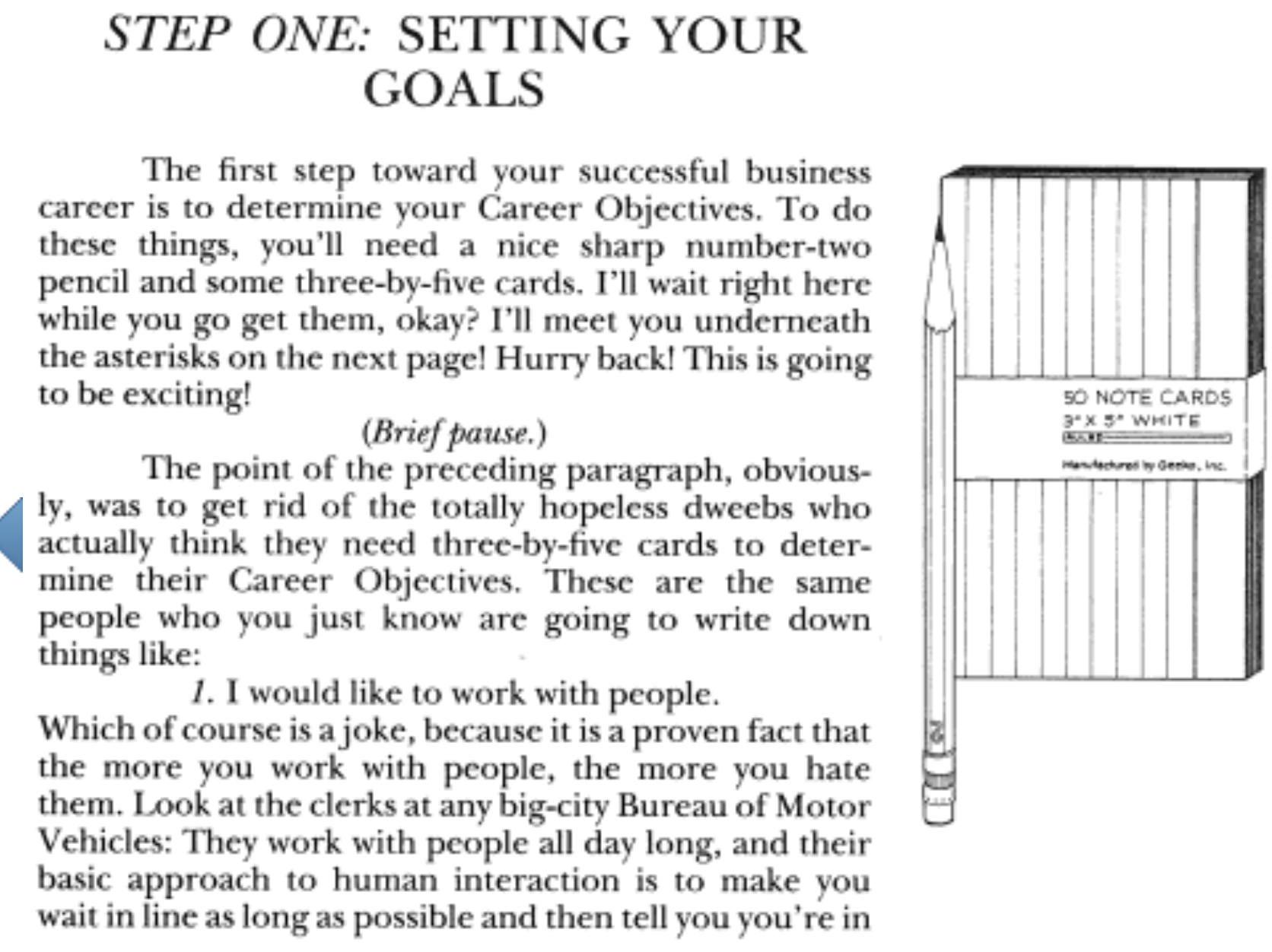