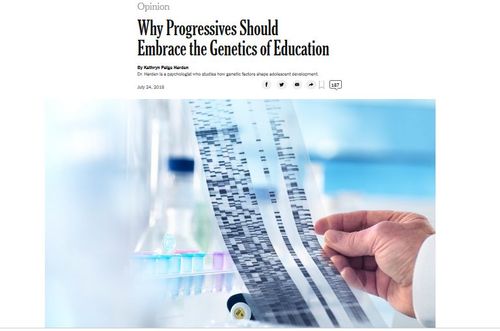 From the NYT opinion section:

Dr. Harden is a psychologist who studies how genetic factors shape adolescent development.

Harden was a co-author of the 2017 Vox article “Charles Murray Is Once Again Peddling Junk Science About Race and IQ,” which I wrote about at length here. In general, Harden knows what she is talking about and wishes to continue being allowed to research genetics without getting Watsoned. This leads her to some contortions.

… Now new research has found that college graduation, with all its advantages, is partly the outcome of a genetic lottery.

On Monday, scientists published a study in Nature Genetics that analyzed the genes of 1.1 million people of European ancestry, including over 300,000 23andMe customers. Over 99 percent of our DNA is identical in all humans, but researchers focused on the remaining 1 percent and found thousands of DNA variants that are correlated with educational attainment. This information can be combined into a single number, called a polygenic score. In Americans with European ancestry, just over 10 percent of people with a low polygenic score completed college, compared with 55 percent of people with a high polygenic score. This genetic disparity in college completion is as big as the disparity between rich and poor students in America.

Because researchers focused on differences within an ancestrally homogeneous group of people, their results have no implications for understanding racial disparities in education. Also, when researchers looked at African-Americans, the genetic variants only minimally predicted educational outcomes. Many more studies will need to be done before we can come close to understanding fully the role of genetics in the American education system.

But research like this makes many people nervous. Linking social inequality to DNA — isn’t this eugenics? After all, the term “eugenics” was coined by Francis Galton, whose 1869 book, “Hereditary Genius,” argued that British class structure was based on a biological inheritance of “eminence.” In the United States, the idea that inferior genes were to blame for poverty led to state-sponsored atrocities, including forced sterilization and institutionalization.

Eugenic thinking is not safely in the past. Today, members of the “human biodiversity movement” enthusiastically tweet and blog

This link leads to an SPLC “extremist” dossier on Stefan Molyneux.

If you can’t trust marketing materials from an organization founded by a member of the Direct Marketing [i.e., junk mail] Association Hall of Fame, what can you trust? If our Junk Mail Geniuses’ claims to be Good People are not above suspicion, what will become of our society?

about discoveries in molecular genetics that they mistakenly believe support the ideas that inequality is genetically determined; that policies like a more generous welfare state are thus impotent; and that genetics confirms a racialized hierarchy of human worth.

In other words, “members of the ‘human biodiversity movement” are Bad People, unlike Professor Harden, who, while she has much the same scientific interests and views, is a Good Person. Just ask her. You can tell she is a Good Person because she’ll warn you about all the Bad Persons.

Similarly, if you see a sleigh full of Russian peasants being pursued by a pack of wolves across the Siberian steppe and occasionally a peasant goes flying out of the back of the sleigh and is devoured by the wolves, giving the other peasants in the sleigh time to get away, you can tell, scientifically, that the person who got eaten by wolves was a Bad Peasant, while the people who got away were Good Peasants.

Just ask them: they’ll tell you. 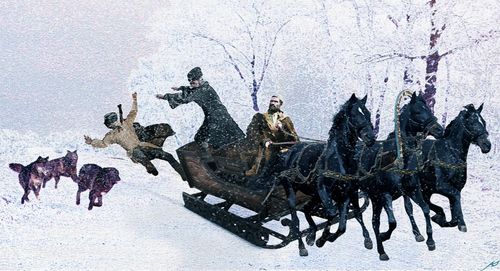 This has led people who value social justice to argue that, when it comes to issues like education, genetic research should simply not be conducted. For instance, in response to an earlier study on the genetics of education, Dorothy Roberts, a law professor at the University of Pennsylvania, asserted that this type of research “cannot possibly be socially neutral — and in fact will intensify social inequities.” She joins a long tradition of left-wing thinkers who considered biological research inimical to the goal of social equality. Lenin himself wrote that “the transfer of biological concepts into the field of the social sciences is a meaningless phrase.”

But this is a mistake. Those of us who value social justice should instead be asking: How can the power of the genomic revolution be harnessed to create a more equal society?

Discovering specific DNA variants that are correlated with education can help us in two ways.

First, these genetic results reveal the injustice of our so-called meritocracy. …

But success in our educational system is partially a result of genetic luck. No one earned his or her DNA sequence

Did you “earn” your children’s DNA sequence? An interesting question, one that tends to get overlooked in the easy talk about “genetic luck.”

, yet some of us are benefiting enormously from it. By showing us the links between genes and educational success, this new study reminds us that everyone should share in our national prosperity, regardless of which genetic variants he or she happens to inherit.

The practicality of “everyone should share in our national prosperity” depends on who “everyone” is defined to be. It makes more sense from a pre-2016 Bernie Sanders anti-Open Borders perspective, defining everyone who is to share in our national prosperity to be members of the American nation, not the whole world. But the Current Year is rapidly pushing toward defining Bernie’s 2015 view as Literally Hitler.

Second, knowing which genes are associated with educational success will help scientists understand how different environments also affect that success. The eventual development of a polygenic score that statistically predicts educational outcomes will allow researchers to control for genetic differences between people, so that the causal effects of the environment are thrown into sharper focus. Understanding which environments cause improvements in children’s ability to think and learn is necessary if we want to invest wisely in interventions that can truly make a difference.

True, but we can already do that crudely simply by classifying students by race in our study. It typically turns out in the studies I’ve been following since 1972 that the special sauce of “good schools” is having good students (i.e., Asian or white). Polygenic scores will allow us to distinguish more finely within races, which doesn’t sound promising for finding more convenient ways to construct good schools based on mediocre students.

As somebody who has been a social sciences aficionado for 46 years, a lot of the discussion in 2018 clearly assumes that nobody before last week ever thought about these issues. But instead there was much insightful discussion especially about 40 to 50 years ago.

For example, while it’s interesting to check to see which students might have high academic potential due to their genes, we have long had more direct ways to measure academic potential, such as GPAs and test scores.

Here’s a very old example: Much denounced IQ researcher Sir Cyril Burt was knighted by a British Labour government for pushing through a plan to give IQ tests to working class kids to find diamonds in the rough, which led to a doubling on the percentage of workers’ children winning scholarships. In the future, maybe you won’t have to give IQ tests to poor kids because you can just look at their DNA and predict how they’d do on an IQ test , but … we’ve had IQ tests for over a century now. Of course, few SJWs are reconciled to the science of IQ testing …

Similarly, scientists have been able to look at the effects of genes versus upbringing for many decades now via twin and adoption studies. See my movie review in Wednesday’s Taki’s Magazine of a 1960s covert experiment by Freudians separating twins to prove that the Freudian family dynamics of nurture was more important than that outdated Galtonian nonsense about genetics. This effort did not turn out well.

So why imagine that Social Justice Warriors will suddenly discover much in DNA that fits their worldview after all their scientific failures of the last half century?

What could you use these advancing polygenic scores for in social sciences? Because they are advertised as only working on white people, and they aren’t yet powerful enough to be very accurate for individuals, the class of study I could them imagine them being useful for in the new future is for studies of low-achieving white communities.

- For example, do Irish Travelers have the same genetic potential for educational attainment as other Irish people and it’s just their Gypsy-like culture that holds them back? Or have they separated enough in terms of mating over the centuries that their genetic potential is now lower?

- What about West Virginia, the state with the lowest NAEP school test scores among whites? Has it been genetically brain-drained by all the high potential people moving out? Or are West Virginian students victims of their environment? Both? 50-50? 80-20? 20-80?

- Professor Caroline Hoxby of Stanford has shown that quite a few high school students scoring at the 90th percentile or higher on SAT/ACT tests are not intensively recruited by prestige colleges. The most overlooked high scorers tend to be Red State white males. That’s pretty interesting as it is, but it could be that SAT/ACT scores are somewhat biased against them because of a lack of a culture of test prep, so perhaps their genetical potential on average is even higher than their test scores would indicate?

I find these kind of Coming Apart-related questions of great interest, but few others seem to care.

Genetic differences in human life are a scientific fact, like climate change. …

But the Fundamental Tenet of Social Justiceism is that all disparities in outcome among identity groups cannot possibly be due to genetics and thus are the fault of the Bad People.

Update: Antonio Regalado’s twitter thread on this is helpful: