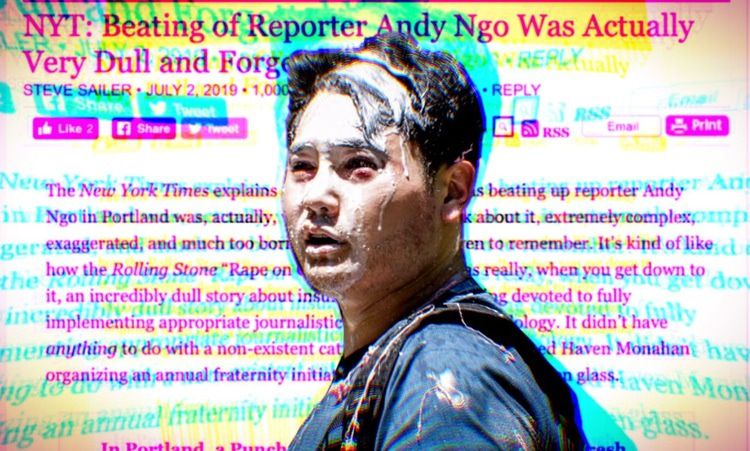 The New York Times explains that masked AntiFa goons beating up reporter Andy Ngo in Portland was, actually, when you stop and think about it, extremely complex, exaggerated, and much too boring to think about or even to remember. It’s kind of like how the Rolling Stone “Rape on Campus” hate hoax was really, when you get down to it, an incredibly dull story about insufficient attention being devoted to fully implementing appropriate journalistic fact-checking methodology. It didn’t have anything to do with a non-existent catfished fantasy figure named Haven Monahan organizing an annual fraternity initiation ritual gang rape on broken glass.

In Portland, a Punch and a Milkshake Rumor Feed a Fresh Round of Police Criticism 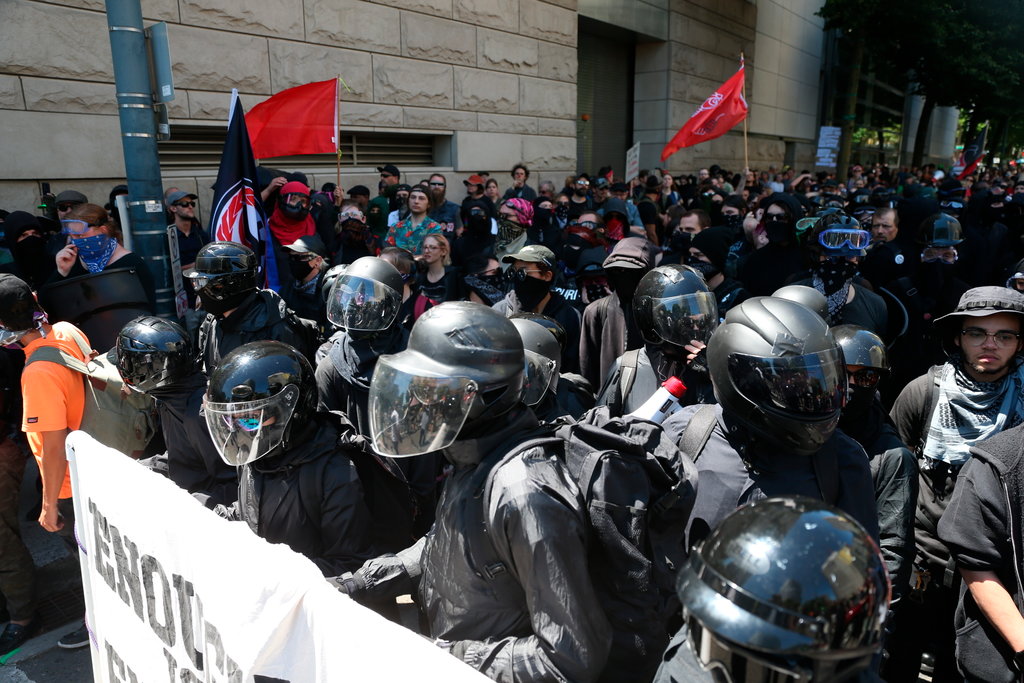 Look at these horrifying Fascists attacking poor transgender black baby bodies! (These are the Fascists, right? Of course they are. If they weren’t, the NYT would tell us in the caption so we don’t get confused.)

It was by now a familiar scene of summer street warfare in Portland: Conservative marchers, this time pushing a #HimToo message in one of the nation’s most progressive cities, faced down a rowdy group of anti-fascist protesters.

Soon the tensions escalated, with a black-clad activist striking the conservative journalist Andy Ngo in the face while others slimed him with what protesters said were vegan coconut milkshakes. Mr. Ngo was left bloodied and obviously shaken, reporting the attack in a video livestreamed to his more than 140,000 Twitter followers when a city medic arrived to check on him.

“Where the hell were all of you?” Mr. Ngo demanded.

By Monday morning, the case was reverberating around the country through conservative circles, where prominent leaders were asking the same question. Senator Ted Cruz, Republican of Texas, called for a federal investigation, declaring without evidence that officials in Oregon’s largest city were allowing the violence as a result of their own liberal sympathies. A Portland State University professor called for impeaching the city’s Democratic mayor, Ted Wheeler.

Fueling the conservative alarm was the Portland Police Bureau’s own suggestion on Twitter during the height of the protests — later walked back slightly — that anti-fascist protesters had laced their milkshakes with quick-drying cement before lobbing them at the marchers.

With political polarization on the rise, the nation’s fraught conversations over immigration, race and policing are increasingly being held in tense street showdowns punctuated with eggs, bricks and, lately, milkshakes. Portland’s long history of street activism has made the city a central stage for many of those conflicts; this weekend’s protests left the police department facing unusual criticism that it had not only been slow to halt the violence, but with its questionable claim about cement milkshakes, had dramatically fueled the furor.

Mr. Ngo is an independent journalist in the Portland area who works with the online magazine Quillette, a publication which prides itself on taking on “dangerous” ideas — in some cases, writing about genetic notions of race, in others, about the shortfalls of feminism. Mr. Ngo has also written for The Wall Street Journal, including an opinion piece in 2018 highlighting the prominent display of Muslim identity as an example of “failed multiculturalism” in London.

He has a history of battling with anti-fascist groups, with the two sides sharing a mutual antipathy that dates back many months. The conservative journalist has built a prominent presence in part by going into situations where there may be conflict and then publicizing the results.

Before Saturday’s event, anti-fascist organizers had mentioned him by name. Mr. Ngo had written on social media that he was worried about the event.

“He’s a political pundit who certainly makes the most out of his conflicts, which sometimes turn violent on him,” said Brian Levin, the director of the Center for the Study of Hate and Extremism at California State University in San Bernardino. “But to his credit, I’ve never seen him be the physical aggressor in the posts that he’s made generally.”

Mr. Ngo also fund-raises on his social media platforms. A GoFundMe campaign created by Michelle Malkin, a conservative commentator, had raised about $150,000 to cover Mr. Ngo’s medical expenses as of Monday evening.

A lawyer for Mr. Ngo, Harmeet K. Dhillon, did not respond to messages seeking comment, but called out on Twitter to “Antifa criminals” whom she said “I plan to sue into oblivion and then sow salt into their yoga studios and avocado toast stands until nothing grows there, not even the glimmer of a violent criminal conspiracy aided by the effete impotence of a cowed city government.”

In Portland, demonstrations in recent years have led to clashes and violence. During one event last summer, skirmishes broke out that left a few people needing medical attention and the police with a collection of apparent weapons they had confiscated throughout the day. The city also saw other violent confrontations in 2017, with the police seizing bricks, knives and brass knuckles.

The department has in the past faced equally strong protests from left-wing groups over aggressive policing. Earlier this year, officials disclosed messages between a police bureau lieutenant and leaders of the far-right group Patriot Prayer, showing friendly exchanges and discussions about protests — messages which prompted many critics to accuse the department of having a built-in bias toward conservatives.

“This story, like many that have come before it, simply confirms what many in the community have already known — there are members of the Portland police force who work in collusion with right-wing extremists,” a city commissioner, Jo Ann Hardesty, said at the time. …

A version of this article appears in print on July 1, 2019, on Page A12 of the New York edition with the headline: Police Tactics Questioned Amid Violence in Oregon.

Text string not appearing in this article: “mask.”