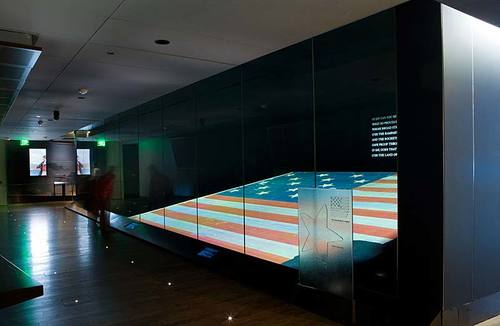 I have been to the Smithsonian Institution's National Museum of American History and seen the exhibit that houses the actual Star Spangled banner that Francis Scott Key saw raised over the uncaptured Fort McHenry. It's an astonishing size—30 by 34 feet—and considering that it's over 200 years old, it's in pretty good shape for a piece of cloth.

I've been seeing recently that the National Anthem is racist. Not just because of the past, or the general whiteness of America, but because of a verse that was in it, that no one has sung for years:

And where is that band who so vauntingly swore

That the havoc of war and the battle's confusion,

A home and a country, should leave us no more?

Their blood has washed out their foul footsteps' pollution. 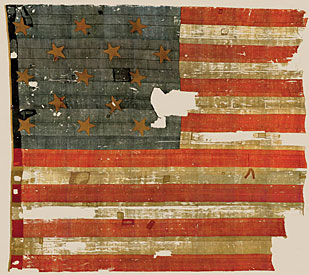 No refuge could save the hireling and slave

From the terror of flight, or the gloom of the grave:

And the star-spangled banner in triumph doth wave,

O'er the land of the free and the home of the brave. 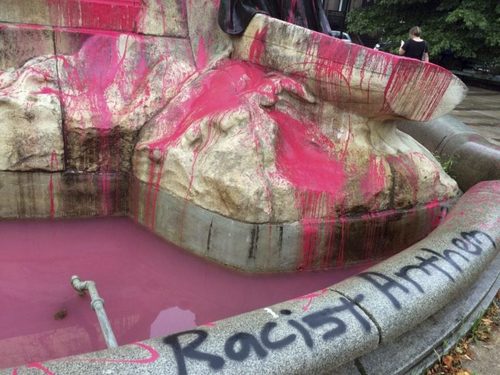 This verse, which is very specific to the War Of 1812, vanished around the time of the First World War to avoid offending America's British allies,  and Isaac Asimov once wrote a short story in which a German spy was tripped up knowing it, unlike normal Americans.

Recently, black activists who can't quite grasp that American history in not really about them, have been latching on to the words "hireling and slave" and saying that Key was talking about killing blacks in the British service. A statue of Key in Baltimore got splashed with paint, and the words "racist anthem",  and a news search for the words "hireling and slave" comes up with 323 results, which is pretty good for a verse that hasn't been generally sung in the memory of anyone now living.

Key was not talking about black slaves in this verse—he's talking about white British soldiers and sailors, who were, respectively, mercenaries and conscripts. I repeat, if you're black, American history is mostly not about you.

“I think when you said, it’s trashing anything older than the milk in your fridge – that’s right, Tucker,” Steyn said. “This is like year zero in Cambodia. The world has to be created anew. So, in the space of about 20 minutes, we have gone from the Confederate flag is racist to ‘The Star-Spangled Banner’ is racist."

Yes, but this has been going on for years—in 2001, the late Sam Francis wrote:

Just over a year ago, in a column about the Confederate Flag controversy in South Carolina, I wrote the following sentences: “… the blunt truth is that racial slavery existed for a far longer time under the American flag than under the brief four years of the Confederacy.  If the NAACP denounces the Confederate flag today for its symbolization of slavery, it can far more easily denounce Old Glory tomorrow for the same reason.  Don't bet your battle flag they won't do it either, or that the political and business elites that cave in to them on the Confederate banner will stand firm on the American flag.”[Enemies, Not Friends, Of Confederate Flag Want War, May 5, 2000]

A year afterward, I wish to inform you that if you did bet your battle flag against my prediction, you just lost it.  Just in time for the first observance of Independence Day in the new century, a black legislator in Tennessee is refusing to recite the pledge of allegiance to the American flag.  Her reason: “This flag represents the former colonies that enslaved our ancestors.”[More]

I quoted this here in 2015 (US Flag No Different From Confederate Flag As Far As Schools And Colleges Are Concerned) and Nicholas Stix quoted it in 2014 (Overheard from Sam Francis’ Grave: “I Told You So, You F—–g Fools!”)

The black legislator who refused to take the pledge kept getting reelected by her black constituents—blacks, including the previous President, aren't particularly patriotic in the Lexington and Concord sense. Many African-Americans aren't, because they listen to people like Jeremiah Wright.

But the "Star-Spangled Banner" isn't the reason. It isn't about them.