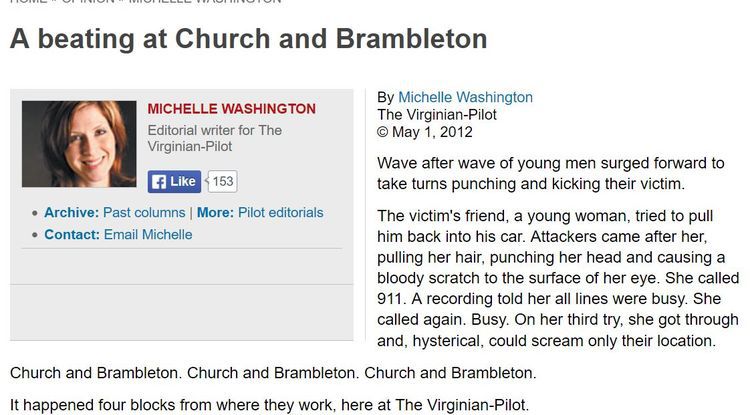 Occidental Dissent (which is likely to know) gives credit to the Drudge Report for breaking a new Black behavior scandal with two posts on Tuesday afternoon:

and right below it

•    On Saturday evening April 14th a white man and woman at a traffic light in their car in central Norfolk, Virginia were subjected to beatings by a crowd of Blacks
•    The Police avoided categorizing the attack properly and have failed to follow up.
•    The employer of the white couple, the Virginia Pilot newspaper, avoided mentioning the incident until it published an opinion column on May 1st.

The Virginia Pilot is pretending it suppressed this story of considerable public interest (the pair had just left the City-owned Attucks Theatre, which presumably many people do on a Saturday evening) because it involved their employees. More likely, like the police, the newspaper prefers not to give publicity to black crime in downtown Norfolk.

VDARE.com applauds the Drudge Report for boosting this story which does indeed exemplify three huge problems in contemporary America:
•    Violent criminality by Blacks
•    Moral turpitude about this problem on the part of the authorities
•    Massive calculated dishonesty about it on the part of the Mainstream Media.
Drudge Report is performing a valuable public service.

But that does not blind us to the fact that the Drudge Report has acted merely because it is engaged in “Dog whistle politics” – described for us by James Kirkpatrick  in Derbyshire, Weissberg, And Dog-Whistling: Conservatism Inc's Uneasy Balancing Act as

...exploiting white racial solidarity by harnessing its anti-Left sentiments to a pro-corporate agenda.

The Norfolk incident of course is a decisive vindication of the wisdom in John Derbyshire’s famous article about avoiding concentrations of Blacks – the Attucks Theatre is a black cultural center.

But as I noted in Derbyshire Atrocity: Why Has Drudge Report Dodged? the usually media-obsessed Drudge coverage avoided all mention of the price of Derbyshire’s honesty.