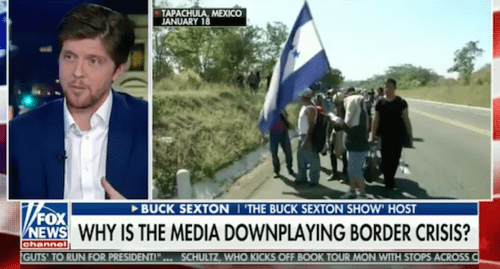 Non-Crisis On Border Is Getting Worse

Former CIA analyst Buck Sexton appeared on the Tucker Carlson show on Monday to report from a recent visit to the southern border on what’s going on there. The border zone situation is “getting worse” as Sexton said twice because the thousands of demanding invaders have “overwhelmed the system with lawlessness.”

Below, foreigners (right) carry the Honduran flag on their way to invade the United States, as Buck Sexton discusses border anarchy.

Somehow, it seems unlikely that Pelosi’s open-borders Democrats now running the House of Representatives will be amenable to fixing the many legal loopholes that allow foreigners to game the system. Not that the earlier Republican legislature was much better. We still don’t even have universal E-verify, the basic American jobs protector.

Here’s the audio version plus a transcript of the interview:

TUCKER CARLSON: Well it’s well-established, at least on TV, that there is no crisis at all on the U.S.-Mexico border. The very idea of that is insane.

REP. TED LIEU, D-CA: Trump and Republicans continue to lie about basic facts. The truth is there is no crisis at the Border that justifies a government shutdown.

JOE LOCKHART, FORMER WHITE HOUSE PRESS SECRETARY: There is no crisis at the Border. So you’ve got to start from the place that everything the President’s saying is fiction. So, it’s very hard to negotiate with someone who’s dealing with a made-up problem.

CARLSON: These guys would literally say anything, like there’s nothing they wouldn’t say. And now, they’re saying it’s a made-up problem. It’s all just a fever dream, a product of your deranged imagination.

But wait. There is that 12,000-person caravan coming up right now from Central America. And Mexico’s new governor is making it easier for them to get here. Or did we just dream that up too?

Buck Sexton is a former CIA analyst, now with The Hill. He’s recently been on the border, and he joins us with an update. So Buck, it’s made up, this crisis on the border. Does that comport with what you’ve seen?

BUCK SEXTON: No. Members of Congress that say that either haven’t been to the border or haven’t even taken the time to speak to members of Border Patrol or Immigrations and Customs Enforcement about the many layers of crisis that are occurring right now at the border.

On one front, you just have now the increase in very serious medical cases, and this is problematic at a number of levels. You have people who are showing up, as we know. There are already two children who died in custody. They were ill when they entered custody.

But there are many people that are now coming into Border Patrol custody. And in most cases or many cases, they’re surrendering, so they’re actually actively seeking out Border Patrol knowing that they’re going to get medical services.

They’re actually having to set up now screening facilities, frontline screening facilities, for Border Patrol to deal with people showing up who have H1N1 Flu, scabies, a whole list, a litany of different communicable, very serious diseases that they have to be treated for, by the way, courtesy of the taxpayer, that often requires taking them to the nearest hospital, which takes one or two depending on the sector Border Patrol agents to accompany them to the hospital, all this, of course, paid for by Uncle Sam.

And then, you also have to deal with the drain on resources. Border Patrol guys are saying, “Look, we’ve got enough problems as it is.” They had about 30,000, close to 30,000 family units alone.

And now, what’s happening is, Border Patrol’s being turned into a de facto Red Cross on our border for people who are coming up with serious illnesses, diseases, people who were eight or nine months pregnant, this is happening in increasing numbers every month.

So the problem, Tucker, is actually getting worse while people are going on TV saying there is no problem.

CARLSON: Well it’s not happening in their neighborhoods. And we need to bring all of this awesomeness, you describe, into the neighborhoods of the people making these policies, and maybe they’ll have a different view of them.

So let me ask you, since you’ve spoken recently to a lot of people who work down there, enforcing our immigration law, do they think there’s a crisis? I mean is there any doubt in their minds?

SEXTON: No. No doubt at all. I mean they’re certain that there is a crisis that’s also getting worse when you look at the strain and the drain on overall border resources. That includes the enormous, and now even bigger, because of the shutdown, backlog in the courts. It includes the way that the asylum system has not been addressed so that Congress really has to actually pass laws, because right now, if you understand the system, there are many different ways to game it.

You can come into the country effectively and skip the entire line and stay in the United States. And even though you won’t get asylum in the end, you’ll be in the interior of the U.S. That has to be addressed by Congress. There’s also a crisis of lawlessness.

One thing, I think, is interesting is when you see all these people who are going on TV and saying, “You can’t lie to the FBI, you can’t lie to the federal government,” when it has to do with the Mueller probe, well the same laws apply, same laws about lying to federal officers, to Border Patrol and Immigrations and Customs Enforcement.

And people who are showing up renting or borrowing children of other people pretending that they’re the — that’s fraud, Tucker. That’s actually illegal. You can’t do that.

CARLSON: How many of those felonies do we prosecute?

It’s essentially they have overwhelmed the system not just with medical requests, but they’ve overwhelmed the system with lawlessness because U.S. attorneys won’t even take up the cases now of, as I was told, 30-something-year-olds saying that they’re teenagers, so they can skip to the front of line, that’s illegal too. The same law that sends people like Stone possibly to jail for allegedly lying to Federal Agents can send people to jail for giving wrong age.

CARLSON: But here’s the difference if I can just say, none of those people volunteered for the Trump campaign. And if they had, they’d be in jail right now.

SEXTON: That is probably true.

CARLSON: So, probably smart enough not to do that. Buck Sexton, great to see you, as always.