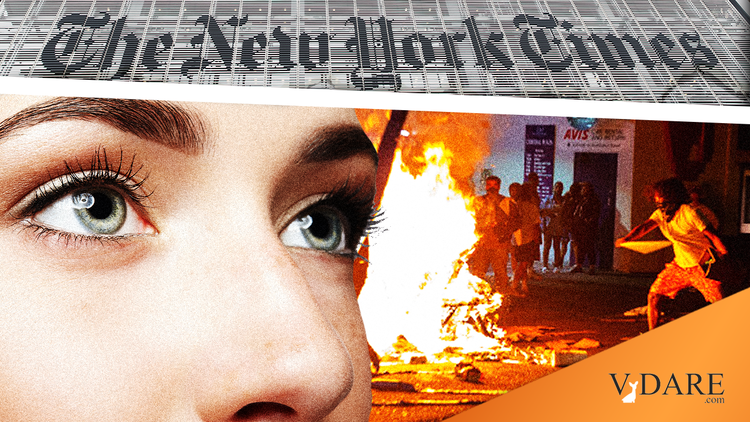 Nicholas Kristof: Who Are You Gonna Believe? The NYT Or Your Lying Eyes?

From the NYT opinion page:

The president has his politically driven narrative. And then there’s reality.

PORTLAND, Ore. — I’ve been on the front lines of the protests here, searching for the “radical-left anarchists” who President Trump says are on Portland streets each evening.

I thought I’d found one: a man who for weeks leapt into the fray and has been shot four times with impact munitions yet keeps coming back. I figured he must be a crazed anarchist.

But no, he turned out to be Dr. Bryan Wolf, a radiologist who wears his white doctor’s jacket and carries a sign with a red cross and the words “humanitarian aid.” He pleads with federal forces not to shoot or gas protesters.

“Put your gun barrels down!” he cries out. “Why are you loading your grenade launchers? We’re just standing ——”

And then they shoot.

Dr. Wolf, an assistant professor at Oregon Health Sciences University, helps at a medic stand operated by volunteers from the medical school. Could they be radical-left anarchists? No, they’ve imposed order on the anarchy of the street by establishing qualifications for field medics and a hierarchy among them, so that any badly injured protester will immediately get the right kind of care.

See, they are organized so they can’t anarchists!

Also, they are anarchists so they can be an organization, and thus they are not liable under the Racketeer Influenced Corrupt Organization law!

Accomplishing all this while tear gas is swirling and impact munitions are whizzing by, without even asking for insurance cards — that seems the opposite of what fanatical anarchists might do.

Maybe the rioting anarchists were in front of the crowd, where there are discussions about Black Lives Matter? I found musicians and activists and technicians, who were projecting a huge sign on the wall of a nearby building — “Fed Goons Out of PDX” — that seemed a bit geeky for anarchists.

Oh, wait, there was a man using angry language about the federal “occupation” and calling it “abhorrent.” Lots of protesters don’t seem to like him, so could he be a crazed anarchist rioter?

Oops, no, that’s just Portland Mayor Ted Wheeler, sputtering after being tear-gassed by the feds.

Listen up, people, we at the New York Times spent the last six years telling you in excruciating detail about the menace posed by the radical right. If the radical left were important, wouldn’t we have, you know, gotten around to mentioning them? So, logically, they don’t exist.