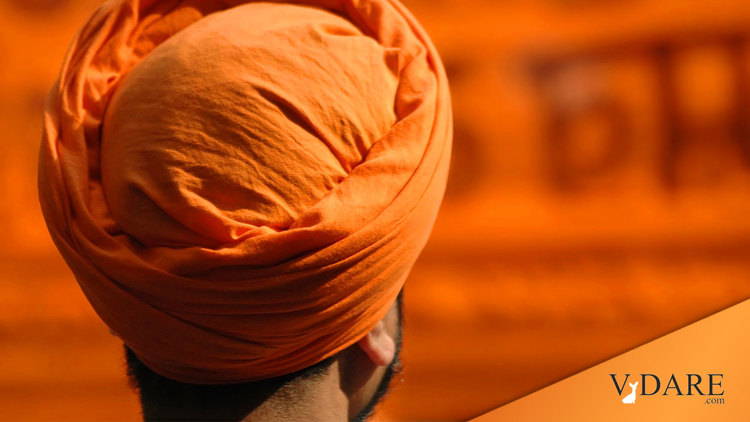 NEW YORK TIMES: "The Marines Reluctantly Let a Sikh Officer Wear a Turban. He Says It's Not Enough."

See, earlier: The Sikhs of Vancouver

The New York Times has an article about a Sikh officer in the U.S. Marine Corps who fought for and won the right to wear a Sikh turban as part of his official uniform, part of the time. Of course, it's not enough. It's never enough.

The Sikhs are an ethnoreligious group from India; in fact, this officer's parents were immigrants from India.

From the Gray Lady:

Almost every morning for five years, First Lt. Sukhbir Toor has pulled on the uniform of the United States Marine Corps. On Thursday [September 23], he also got to put on the turban of a faithful Sikh. It was a first for the Marine Corps, which almost never allows deviations from its hallowed image, and it was a long-awaited chance for the officer to combine two of the things he holds most dear.

“I finally don’t have to pick which life I want to commit to, my faith or my country,” Lieutenant Toor, 26, said in an interview. “I can be who I am and honor both sides.”

His case is the latest in a long-running conflict between two fundamental values in the United States military: the tradition of discipline and uniformity, and the constitutional liberties the armed forces were created to defend.

The article says Lieutenant Toor is the first Marine in the history of the Corps to wear a turban. But he can't wear it in all situations.

The Marine Corps has made the allowance only to a point. Lieutenant Toor can wear a turban in daily dress at normal duty stations, but he cannot do so while deployed to a conflict zone, or when in dress uniform in a ceremonial unit, where the public could see it.

So the Sikh lieutenant is not satisfied, and is fighting to be able to wear it all the time.

Lieutenant Toor has appealed the restrictive decision to the Marine Corps commandant, and he says that if he does not get a full accommodation, he will sue the Corps.

“We’ve come a long way, but there is still more to go,” he said. “The Marine Corps needs to show it really means what it has been saying about strength in diversity — that it doesn’t matter what you look like, it just matters that you can do your job.”

Nearly 100 Sikhs currently serve in the Army and Air Force wearing full beards and turbans. A Sikh cadet graduated from the U.S. Military Academy at West Point this spring in a smartly tied white head wrapping, among a sea of brimmed service caps.

“It’s become fairly routine, and there have been very few issues. That’s what makes the Marine response in this case so surprising,” said Giselle Klapper, a civil rights attorney with an advocacy group, the Sikh Coalition, which has helped Sikh troops apply for exceptions.

So there's actually an organization with the specific goal of getting exceptions for Sikhs in the U.S. military.

On September 23, 1stLt Sukhbir Singh Toor wore his USMC uniform with his beard and turban for the first time. His fight for full religious accommodation that will allow him to keep his articles of faith through his career, however, continues. Read more: https://t.co/Byb9SD2a3D

Lieutenant Toor grew up in Washington and Ohio, the son of Indian immigrants. His father wore a beard, a turban and other symbols of Sikh religious devotion, including a simple steel bracelet and small blade that are meant to remind faithful Sikhs that they are expected to act as virtuous — and if necessary, armed — defenders of the innocent and oppressed.

Lt. Toor is looking at the bigger picture.

Lieutenant Toor worries that ...that the hard stance on beards and turbans will make Muslims, Sikhs and others less likely to serve and deny them equal opportunity. “Sikh kids growing up might not be able to see themselves in uniform,” he said. “Even if they want to serve, they might not think their country wants then [sic].”

The article presents the issue as being a religious freedom issue, which it is in part. But it's also an ethnic issue. Sikhs are an ethnic group as well as a religion. It's an ethnic group with a very small presence in the U.S.A. until recently.

And here's a possible solution for Lieutenant Toor, if he's unhappy about not being allowed to wear his Sikh turban at all times.

There is a another country where many Sikhs serve in the military. The proportion of Sikhs in this country's military is higher than that in the general population.

It's the country known as India. India has a big military with many Sikhs in it, including Sikh officers.

It's where Lt. Toor's parents came from.

Would Lt. Toor feel more at home in that country's military?