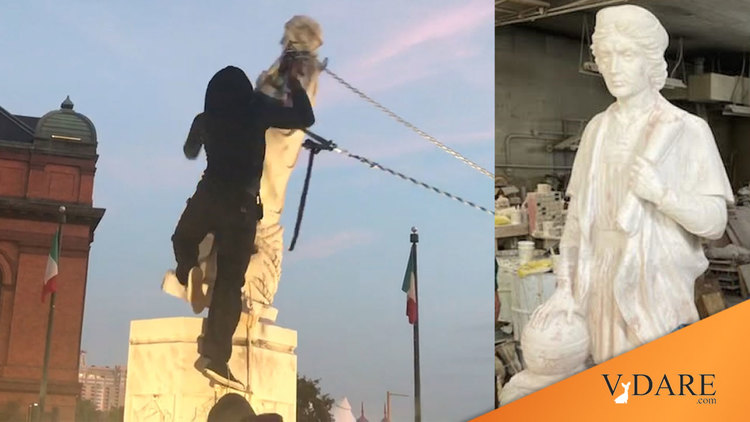 Earlier: Reagan On Columbus: "Columbus Challenged The Unknown When He Sailed Westward In 1492"

During the anti-white George Floyd riots of 2020, a statue of Christopher Columbus (originally dedicated by Ronald Reagan in 1984) was destroyed in Baltimore. In fact, it happened in front of police, who did nothing as the statue of Columbus was thrown into the Harbor.

But nature heals…what was it Senator Bilbo said about rebuilding our cities? Even if they destroy our monuments, we can rebuild them too.

Columbus statue that was thrown into Harbor is rebuilt, WMAR2News.com, April 25, 2022

BALTIMORE — After a group of protesters threw Little Italy’s longtime Columbus statue into the Harbor two years ago, the statue has been recreated by a local sculptor.

Meanwhile, Baltimore’s Italian-American community wants to put a new statue of an anonymous Italian immigrant in the plaza where the Columbus statue once stood. John Pica, president of the Italian American Organizations United, said the hope is rename it “Piazza Little Italy,” with an Italian-American theme.

Pica said the organization has been working with City Councilman Zeke Cohen, the indigenous-people community, the Jewish community, and the African-American community to re-theme the park.

But local sculptor Will Hemsley also dedicated himself to rebuilding the solemn, marble Christopher Columbus statue, costing him about $80,000. The new sculpture is almost identical to the original one.

Pica said they are still searching for a site for the new sculpture.

During the protests that swept the country in the summer of 2020, demonstrators pulled down the Columbus statue at the Harbor and tossed it into the water. The Italian-American groups spent about $8,000 to fish it out, Pica said.

“We were very disappointed when it happened,” he said, adding he was mostly disappointed by the police response. Pica said Baltimore police stood by and watched the entire thing without intervening. (Then-Mayor Jack Young had criticized the destruction.)

Pica said Tuesday that the recreation of the sculpture is not necessarily about Columbus, but about what he represents as an incredible explorer who opened up the path between western Europe and the Americas. Italian American Organizations United had given the statue to the city in 1984, and the city in response had promised to maintain it. After the events of 2020, the city transferred ownership back to the private organization.

Pica said he does think the effort to destroy certain figures and sculptures has merit, “but you can’t do it wholesale.”

Our cities can be destroyed. Our monuments defaced.

But our cities can be rebuilt; our monuments recast.

What came before us can be destroyed. But it can be rebuilt too.

The ultimate question: What happens when a people not only survive the purge of their past and present, but rebuild what was desecrated?

What happens to those who tried to destroy what was, what is, and what will be for our posterity?