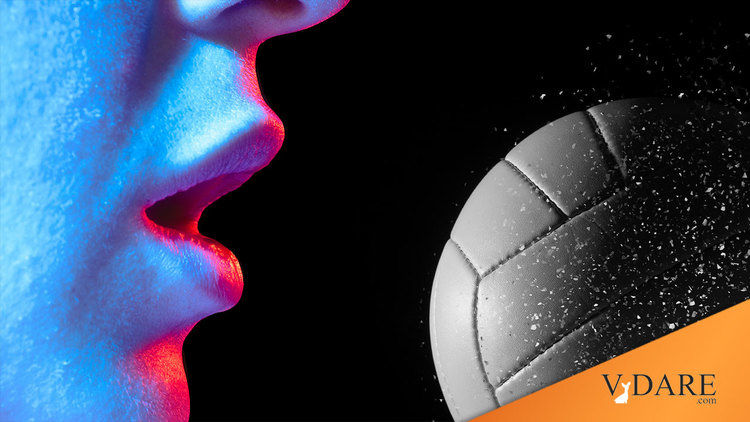 National News vs. Local News—Why Are National News Consumers Forced To Hear About An Imaginary Racial Slur At A Volleyball Game?

A spectator was banned from Brigham Young sporting venues after a Black player on Duke’s volleyball team was the target of racial slurs and threats that she said “caused us to feel unsafe” during a game Friday at Smith Fieldhouse in Provo, Utah. Duke’s match Saturday was relocated because of the incident.

The incident was first reported by Lesa Pamplin, an attorney in Fort Worth, who tweeted that her goddaughter, Duke outside hitter Rachel Richardson, was called a racial slur “every time she served” during a match between Duke and BYU. Pamplin also said Richardson, a sophomore from Ellicott City, Md., who is the only Black starter on the team, was “threatened by a white male that told her to watch her back going to the team bus.”

Richardson’s father, Marvin, told the Salt Lake Tribune that a spectator in the BYU student section repeatedly shouted a slur but was allowed to remain at the event, even after Duke players complained to the referees. He said a police officer was later placed on the Duke bench.

Rachel Richardson described the scene Sunday on Twitter, writing that “my fellow African American teammates and I were targeted and racially heckled throughout the entirety of the match. The slurs and comments grew into threats which caused us to feel unsafe. Both the officials and BYU coaching staff were made aware of the incident during the game, but failed to take the necessary steps to stop the unacceptable behavior and create a safe environment.”

Richardson said the heckling made it impossible to focus on the game and officials “failed to adequately address the situation immediately after the game when it was brought to their attention again.”

But Richardson defended the team’s decision to continue to play.

… “I refused to allow those racist bigots to feel any degree of satisfaction from thinking that their comments had ‘gotten to me.’ So I pushed through and finished the game. Therefore, on behalf of my African American teammates and I, we do not want to receive pity or to be looked at as helpless.

BYU — which is hosting Duke, Rider and Washington State at the doTERRA Classic — said in a statement Saturday that the fan, who was not a student, would be banned from the school’s athletic venues. …

Utah Gov. Spencer Cox (R) condemned the fan’s behavior in a tweet Saturday. “I’m disgusted that this behavior is happening and deeply saddened if others didn’t step up to stop it,” he wrote. “As a society we have to do more to create an atmosphere where racist a**holes like this never feel comfortable attacking others.”

“This is an opportunity to dig deep into closed cultures which tolerate amoral racist acts, such as those exhibited Friday night, and change them for the better. It is not enough to indicate that you are not racist. Instead you must demonstrate that you are anti-racist.”

And from the national New York Times:

… B.Y.U., whose student population is less than 1 percent Black, has struggled with creating an inclusive environment for its students of color, according to a February 2021 report by a university committee that studied race on campus.

The report found that the university lacked institutional support for its few students of color, failed to recruit and retain a diverse student body and had a faculty far less diverse than the national average, with less than 7 percent of faculty members being people of color.

But then there’s local news from KUTV:

PROVO, Utah (KUTV) — Athletic administrators at Brigham Young University said Wednesday they have not found any proof that a fan who was banned from university athletic events over the weekend used any racial slurs during a volleyball game against Duke University.

“The person who was banned was the person identified by Duke as using racial slurs,” said BYU associate athletic director Jon McBride in an email to KUTV 2News. “However, we have been unable to find any evidence of that person using slurs in the match.”

Further, McBride said, the university has “no evidence of any other individuals at the match uttering racial slurs.”

…Late Tuesday, though, The Salt Lake Tribune reported that BYU police reviewed surveillance video of the individual who was banned and did not see him shouting anything.

“When we watched the video, we did not observe that behavior from him,” BYU Police Lt. George Besendorfer told The Tribune.

In a police report Friday evening, obtained by KUTV 2News, BYU Police Officer Richard Laursen wrote that a BYU Athletics official told him during the third set of the match that a “racial comment was made to the Duke Volleyball players” from the student section. The officer wrote that he positioned himself between the Duke bench and the student section during the next set, but he did not “hear any sexual or racial comments during the set.”

During that time, Laursen wrote, he interacted with a fan in the student section who appeared to have special needs.

That fan, whose name was redacted in the police report, was later identified as the one who allegedly shouted racial slurs at the Duke players.

Following the match, the officer said Duke’s assistant coach reported that “one of the fans got into the face of one of the Duke players and that the player felt uncomfortable by the fan.” The officer said it was the same fan he had been interacting with.

“The individual said he thought the Duke player was a BYU player who is one of his friends,” Laursen wrote, adding that the fan denied using any racial slurs during the event. “He said the only comment he made was that they shouldn’t hit the ball into the net.”

Yet, Laursen wrote, he was later told by a BYU Athletics officials that the Duke team insisted that offensive comments continued to be made throughout the match, even during the fourth set, and that they felt the officer did nothing to stop it.

“I told the Athletic staff that I never heard one racial comment being made,” Laursen wrote.

Later, the officer wrote, he reviewed game footage with a BYU volleyball coach, but there was nothing to indicate the fan did anything inappropriate during the match.

So, it sounds like perhaps the Duke players got freaked out by a friendly retard and accused the Special Needs guy of being a racist. And the national news media devoured that allegation because everybody knows what hate-filled racists Mormon women’s volleyball fans must be.

“He seemed to be more interested in talking to me than cheering for BYU,” Laursen wrote. “It was evident based on the individual’s comments, stuttered speech and mannerisms that he has special needs. Based on my training and experience in Crisis Intervention Training, he may have (A)sperger syndrome or could have autism. The individual was articulate, but socially awkward. The individual kept scrolling through his phone and didn’t seem too involved in the game.”

So it sounds like the Duke players were ableist.