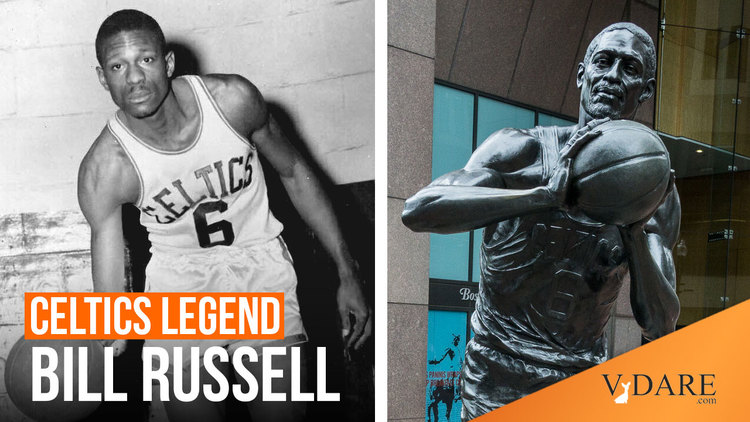 Several years ago I wrote a VDARE piece about how and why the city of Boston dedicated a statue to Celtic legend Bill Russell, who died last week [Doing The Wrong Thing: Does Bill Russell Really Deserve A Statue In Boston?, March 1, 2011]. Here is a photo of the statue.

Russell detested the city of Boston; mostly because he didn’t like white people. But my theory is that the real reason Russell hated Boston is because he was rejected by the city’s black elites.

In his book, Second Wind: Memoirs of An Opinionated Man, Russell describes how a member of the small black overclass in Boston confronted him soon after he joined the Celtics and told him that his friends and relatives had been in Boston for generations. “We will never accept you,” the man flatly told Russell.

Bill Russell was a Louisiana-born and Oakland-raised dark-skinned black man who did not mesh with Boston’s old establishment blacks—who used to refer to themselves as “Black Brahmins”—and who have long vacationed on Martha’s Vineyard and attended the region’s elite schools.

Consequently, Russell moved to a town north of Boston, eventually divorced his black wife in favor of a series of white women, and lived the rest of his life in white suburbia.

And yet Bill Russell has always been portrayed as being a victim of white racism. Go figure.