Multiculturalism's Failure as an Ideology Noted

One of the best writers on this topic is Prof Lawrence Harrison, the author of several books concerning the relationship of culture to progress. The linked article includes a nine-minute audio interview with Harrison that is worth your attention: The End of Multiculturalism, (Christian-Science Monitor, Feb 26, 2008).

The author puts his ideas into practice at Tufts' Cultural Change Institute.

Since the 1960s, multiculturalism has become a dominant feature of the political and intellectual landscape of the West. But multiculturalism rests on a frail foundation: cultural relativism, the notion that no culture is better or worse than any other — it is merely different.

When it comes to democratic continuity, social justice, and prosperity, some cultures do far better than others. Research at Tufts University's Fletcher School of Law and Diplomacy, summarized in my recent book, "The Central Liberal Truth: How Politics Can Change a Culture and Save It From Itself," makes this clear.

Extensive data suggest that the champions of progress are the Nordic countries — Denmark, Finland, Iceland, Norway, and Sweden — where, for example, universal literacy was a substantial reality in the 19th century. By contrast, no Arab country today is democratic, and female illiteracy in some Arab countries exceeds 50 percent.

Culture isn't about genes or race; it's about values, beliefs, and attitudes. Culture matters because it influences a society's receptivity to democracy, justice, entrepreneurship, and free-market institutions.

Below is Prof Harrison's handy chart comparing progress-friendly cultures to progress-averse ones, taken from his Social Contract article, Immigrants and Culture. 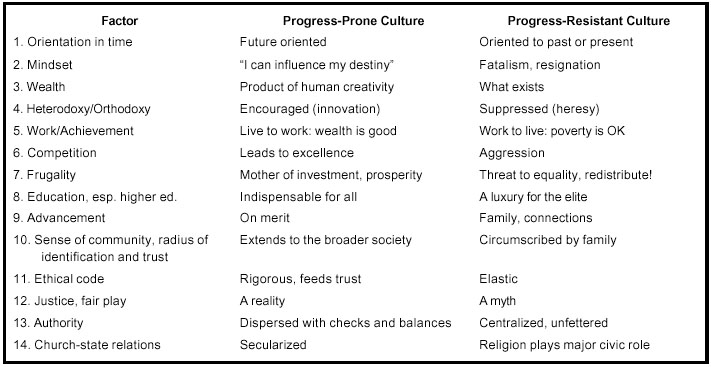