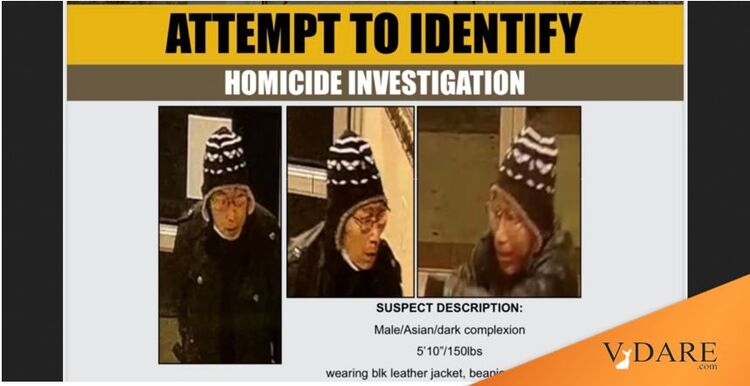 A recent mass murder by an ”Asian male” in Monterey Park, CA—a Chinese immigrant community—was reported, and the race of the victims—Asian—was also reported, with no mention of the race of the gunman, causing all Twitter, including some real journalists, etc., to assume it was a “White Racist Mass Murder” caused by (a) Trump and (b) American gun rights, limited as these are in California.

An Asian woman named Lacy Banis [Email her], who works for Entertainment Weekly, and who has now protected her tweets, tweeted this, which was immediately proved wrong. 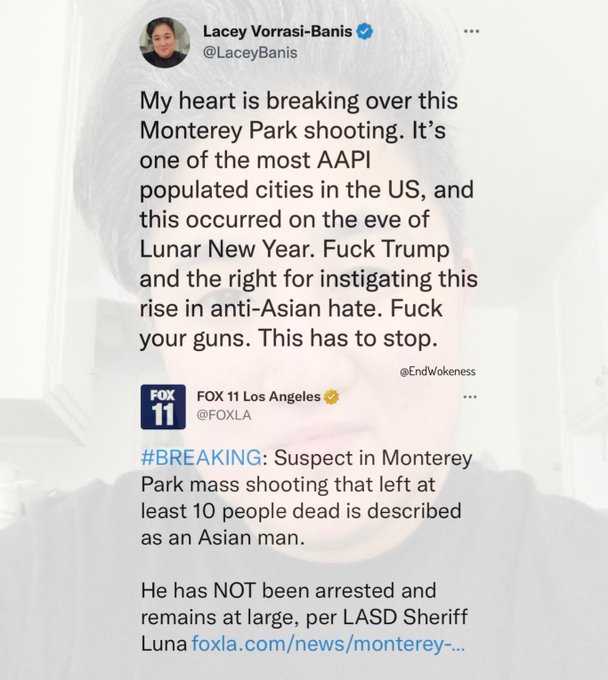 Andy Ngo commented on how irresponsible this was, quoting two professional minority politicians. (Hakeem Jeffries, who wants to ”crush the rise of hatred and intolerance whenever and wherever it is found” represents Brooklyn, and is a co-sponsor of the ”Federal Death Penalty Prohibition Act,” so he doesn’t want to crush murder, just ”intolerance.”)

It looks like Democrat politicians received talking points to weigh in inaccurately about the mass shooting in #MontereyPark. What is sick is that they speculated recklessly about a motive & identity of the suspect WHILE the gunman is still at-large. https://t.co/ZbaiQTOIbY

The Sheriff of Los Angeles County has issued a picture of a male Asian suspect:

On Saturday January 21, 2023 at 10:22 PM the suspect male/adult/Asian pictured above was involved in a shooting. Investigators have identified him as a Homicide suspect and he should be considered armed and dangerous.
Contact LASD Homicide with any information at 323-890-5000. pic.twitter.com/2gPUBBybvv

But not the name, for some reason.

One notable thing: This happened during a Chinese New Year celebration. Like Ashley Banis above, almost everyone in the MSM seems to have received a memo that this should be called ”Lunar” New Year, which is meaningless to most people. This is same impulse that makes the MSM refer to Gypsies as ”Roma,” Christmas as the ”Holiday Season” and all kinds of immigrant criminals as ”Man Arrested.”

Andy Ngo reports that they’ve got the perpetrator:

One more thing: USA Today did an article about Asian-Americans fearing ”backlash.” It kind of sounds like it was written while they were still hoping it was a ”white supremacist,” but now that it’s a mass murder committed by an Asian, they have to change tack:

From @kulkarnimanju @usatoday: “This tremendous act of violence, at a place where many Asian American families come to gather and celebrate, is sending shockwaves through our community and resurfacing all-too-familiar feelings of pain and fear.” https://t.co/h7cyNldsuq