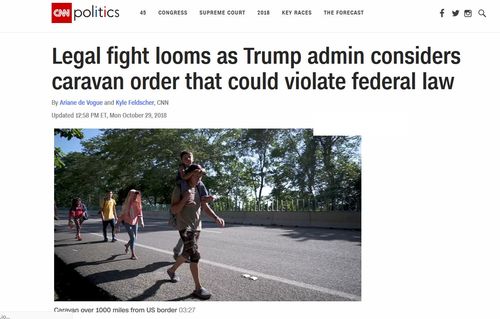 More Options For Trump On The Caravan: Make Applicants For Asylum Wait IN MEXICO

It is good to hear that finally the President is getting some good advice on how to deal with the Caravan of Death To America By Demographic Displacement. In a surprisingly fair and balanced report, CNN outlines what advice the President is considering. I am not certain how he is getting this advice, as DHS Secretary Kirstjen Nielsen (Lady DACA) is clearly in over her head, and she does not appear to be committed to defeating the Caravan.

There might be some backdoor to the President, such as Stephen Miller or  L. Francis Cissna, Director of U.S. Citizenship and Immigration Services. Importantly, the advice filtering through to the President is just what I myself recommend, vigorous use of executive authority based on the successful Muslim Ban, but missing some other important advice—to fully and faithfully implement Expedited Removal.

Ignore the misleading headline (“Could Violate Federal Law”), that’s just CNN being CNN—the substance of the article is fair.

As a migrant caravan hundreds of miles away moves toward the United States, the Trump administration is weighing its options on trying to block entry to the United States and possibly narrow the category of individuals who can apply for asylum.

While the administration argues publicly that it wants to bolster US capabilities at the border, immigrant rights groups warn that if the government attempts to limit asylum seekers from receiving a fair hearing, they will rush to court.

The dispute, with no firm policy in place, comes in the shadow of the midterm elections and could prompt a massive legal battle.

It appears that someone has finally given the President advice on the strongest hand he has in this controversy, his authority to ban aliens and classes of aliens from entry.

Bolstered by a win in the Supreme Court’s last term upholding the legality of the travel ban, the administration could once again rely on federal immigration law and argue that the President has broad authority when it comes to who enters the country…

The groups have heard rumors for months, for example, that the administration was going to introduce new asylum regulations in December. But in the last few days, some had heard there was a push to pull out one provision of those regulations and give the President authority to bar categories of asylum seekers from entering the United States.
A second step would be to implement that authority by issuing a presidential proclamation aimed at particular groups, for instance, those who are in the caravan or for all Central American nationals.

In this fight it is clear that the precedent decision on the Muslim Ban will hold with the new Justice “Hold My Beer” Kavanaugh, but there is also something that the President’s advisers have failed to present to him. And it is a tool that the government has had for many long years and been used routinely, at least until the post 9/11 period when the U.S. Customs Service (USCS) took over the inspection of arriving aliens at Ports-of-Entry (POE) after the Homeland Security Act was passed, the place where persons and goods apply for entry to the United States.

It is long established in law and policy that any alien who presents himself for inspection at a designated land POE from Mexico or Canada, and is found to inadmissible to the United States by the inspecting immigration officer, and that alien requests a hearing from the Executive Office for Immigration Review, the immigration courts, that alien must wait for that hearing on his admissibility in Mexico or Canada.

(d) Service custody. The Service will assume custody of any alien subject to detention under paragraph (b) or (c) of this section. In its discretion, the Service may require any alien who appears inadmissible and who arrives at a land border port-of-entry from Canada or Mexico, to remain in that country while awaiting a removal hearing. [emphasis added, ed.] Such alien shall be considered detained for a proceeding within the meaning of section 235(b) of the Act and may be ordered removed in absentia by an immigration judge if the alien fails to appear for the hearing.

I must apologize to the President, and whoever may be  reading my material, for failing to bring this option to light. It is an obscure part of Federal immigration law and even experts may have overlooked this. Though I want to point out that the Resistance deep inside DHS (I’m looking at you, Lady DACA) and the USCS hacks who displaced the great men and women of the legacy Immigration and Naturalization Service (INS). Legacy Customs Inspectors and their managers just have no knowledge or interest in immigration law and immigration enforcement. Beside getting rid of Lady DACA, it is also time for reform of U.S. Customs and Border Protection (CBP) to reemphasize immigration enforcement at POEs.

This policy of forcing failed applicants for admission, in this case the Caravanners seeking asylum, to stay outside in Mexico will be helpful in dissuading them from coming in the first place and in the second enable the EOIR to deal with the avalanche of fraudulent asylum claims

Since the backlog of cases in the EOIR is years, forcing these Caravanners to wait in Mexico will defeat their fraudulent intent, which is to submit a bogus application for asylum, then because of a shortage of detention space, be released into the United States to never appear for their immigration hearing. Just like the infamous Pizza Guy, who did that, as almost a million others did as well.