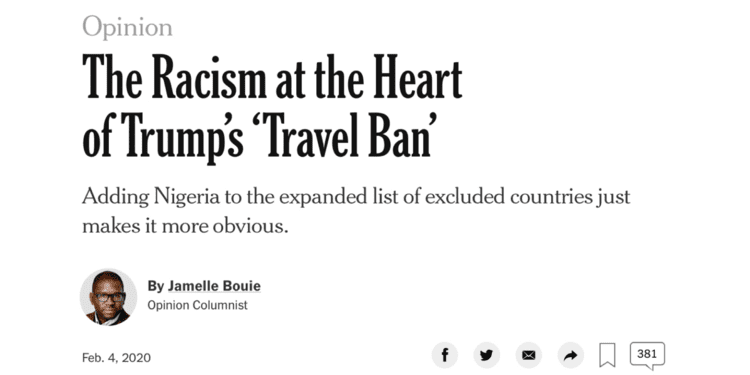 More Behind-The-Curtain Patriotism Among Editors At The NYT?

The fundamental concern here at VDARE.com is The National Question, which prompts our heavy focus on immigration:

WHAT IS THE ‘NATIONAL QUESTION’?

The current Merriam-Webster definition of “nation-state” is “a form of political organization in which a group of people who share the same history, traditions, or language live in a particular area under one government.” The National Question is, in short, an examination of how long the US can continue as a coherent nation-state in the face of current immigration policy.

Of course, such a question is anathema to our "elites," whom Mark Steyn has called "this country's depraved political class."  The question might even be unthinkable—beyond their blinkered comprehension.

And yet, there are occasional glimmers of comprehension of the national-question concept even at such beyond-hope institutions as the New York Times (often referred to as "the Gray Lady," but I prefer "the Gray Slut").  Last November, I stumbled across evidence for such glimmers and wrote about it at VDARE.com in Comment Section Provides Belated Evidence Of An Editorial Mole At The NEW YORK TIMES.  (More properly, it was my stumbling across the evidence that was "belated.")

Well, here's another such belated discovery: Times grievances-hustler Jamelle Bouie emitted an op-ed on February 4, 2020, The Racism at the Heart of Trump’s ‘Travel Ban’; read it, if you must, here.  The article attracted 381 online comments, of which 10 are "NYT Picks."  Here is the second pick among those 10, by someone who identifies as "Gander FIR":

United States still is a majority European White and Christian nation.
It is perfectly reasonable that a nation state wants to retain its national identity and adjusting its immigration policy to that end is absolutely valid as well.
What Trump administration doing in no different from what Singapore , Norway or Japan is doing in order to prevent social upheaval resulting from untrammelled immigration.
Yes United States was founded by immigrants but that doesn’t mean that those open border policies should stay the same when the nation has matured and its predominant culture has taken root.
To deny perfectly justified apprehensions of the natives about the ill effects of uncontrolled immigration ( jobs,assimilation, respect to values cherished by the natives such as freedom of speech, freedom from religion , women’s rights and rights of sexual minorities) is both obtuse and intellectually dishonest. I have seen strong indications that a silent majority of Americans tacitly approve of these measures even if they are hesitant to voice them in polite society for the fear of being labelled a bigot, racist or a xenophobe.

So someone who reads the Gray Slut is able to think along national-question lines—and make the case for it in writing in public (admittedly, with a pseudonym).  Further, someone on the paper's editorial-page staff rated Gander FIR's comment highly among the 381.  And—final bonus—this comment received 109 up-votes from the online readership, second best among the Times Picks.

Of course, expert VDARE.com readers will take issue with Gander FIR's assertion that "Yes United States was founded by immigrants ..."  But I wouldn't hold this against the commenter, since the statement is equivalent to the hyper-tiresome "nation of immigrants" trope, which is so hard to escape.  Still, it's worth quoting John O'Sullivan on the point, from his review in The American Conservative of Samuel Huntington's 2004 book Who Are We?:

Huntington punctures several comforting national myths dear to both liberals and conservatives but false and sometimes destructive in their current implications. He points out, for instance, that the U.S. is not “a nation of immigrants.” It is a nation that was founded by settlers—who are very different from immigrants in that they establish a new polity rather than arrive in an existing one—and that has been occupied since by the descendants of those settlers and of immigrants who came later but who assimilated into the American nation. Americans therefore are under no moral obligation to accept anyone who wishes to immigrate on the spurious grounds that everyone is essentially an immigrant. Americans own America, so to speak, and may admit or refuse entry to outsiders on whatever grounds they think fit.

Anyway, here's to the patriotic troll(s) at the Gray Slut: Thanks, and keep your head(s) down!