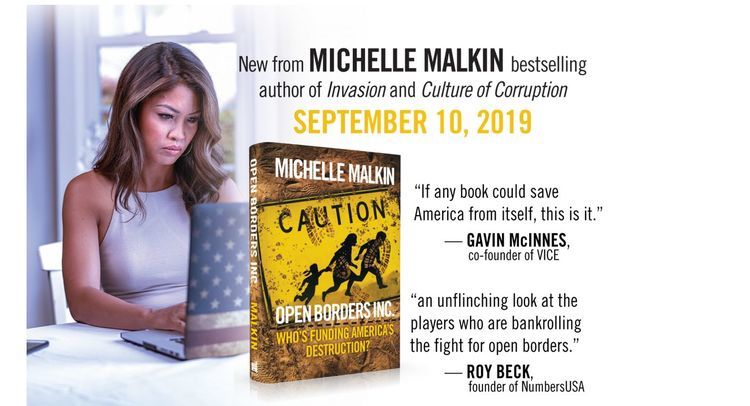 See, earlier: Michelle Malkin: Get Off the Sidelines—#StandWithICE

Michelle Malkin's new book Open Borders Inc.: Who's Funding America's Destruction? is out today. A reminder that you can not only order the book in solid form, but also the Kindle book, and Audible Audiobook.

This is Michelle's seventh book, but only her third or fourth on immigration, depending on if you count In Defense Of Internment as an immigration book.

This is the Amazon blurb:

Follow the money, find the truth. That’s Michelle Malkin’s journalistic mantra, and in her stunning new book, Open Borders Inc., she puts it to work with a shocking, comprehensive exposé of who’s behind our immigration crisis.

In the name of compassion—but driven by financial profit—globalist elites, Silicon Valley, and the radical Left are conspiring to undo the rule of law, subvert our homeland security, shut down free speech, and make gobs of money off the backs of illegal aliens, refugees, and low-wage guest workers.

Malkin names names—from Pope Francis to George Clooney, from George Soros to the Koch brothers, from Jack Dorsey to Tim Cook and Mark Zuckerberg. Enlightening as it is infuriating, Open Borders Inc. reveals the powerful forces working to erase America.