Michelle Malkin On The Brunswick Hoax

Over at Unz Review, the incomparable Michelle Malkin has a powerful piece on the many lies surrounding the Brunswick Hoax. She pulls no punches and lands many knockout blows, delivering a TKO to the Ahmaud Arbery martyrdom. She writes:

Do you know who these two race-hustlers are? If you pay attention, you know that Black Lives Matter co-founder Shaun King (a.k.a. Talcum X, Martin Luther Cream, or W.E.B. De Fraud) and lawyer Lee Merritt are Morehouse College buddies who have been partners in anti-white, anti-cop agitation for upwards of two decades.

On Tuesday, King posted a leaked video that immediately went viral of “Just a Jogger” Ahmaud Arbery, whose family Merritt represents. Dissatisfied with the results of a Waycross, Georgia, D.A.’s decision in February not to arrest two armed white men involved in chasing and fatally shooting Arbery, whom they suspected of burglary, someone in possession of the clip somehow got it into social media master King’s hands. King’s post of the purloined video has racked up more than 7 million views, whipping up instant, knee-jerk outrage from LeBron James to Whoopi Goldberg to Joe Biden to some of the same ConInc virtue-signaling simps who threw the Covington boys under the bus. 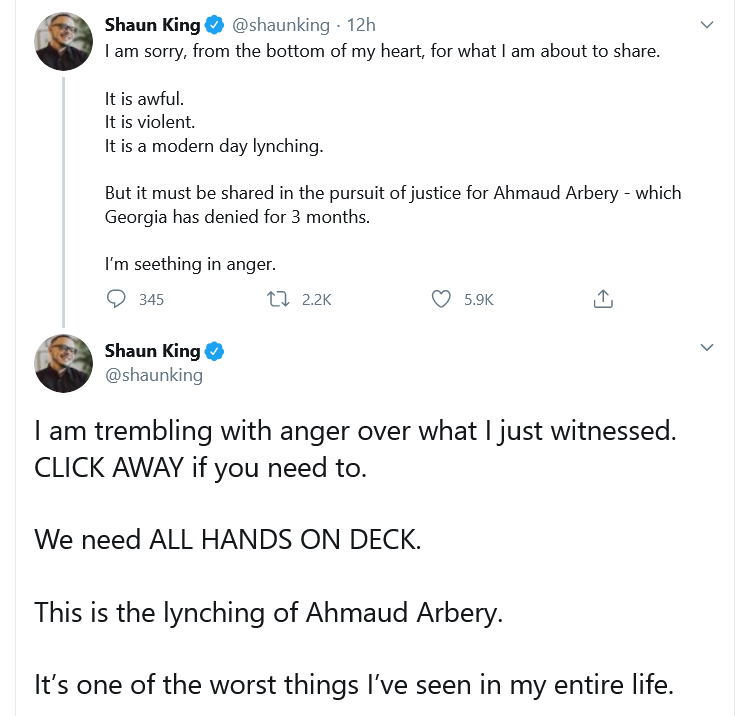 Gee, who could have leaked the video to King, such that it “emerged” out of nowhere and rocketed into the media stratosphere?

If you pay attention, you will recall that Shaun King and Lee Merritt teamed up to perpetrate the Sherita Dixon-Cole hate crime hoax of 2018. Dixon-Cole, who is black, falsely accused innocent white Texas state trooper Daniel Hubbard of raping her during a traffic stop. Her lawyer was Merritt. King “broke” the viral story and everything was going swimmingly until law enforcement released the 2-hour bodycam video showing…no such thing.

The admitted liar was not prosecuted based on a technicality. Incredibly, King secured a job with the Harvard-affiliated Fair Punishment Project, which in part conducts research to prevent wrongful convictions and went on to headline the Innocence Project’s 2019 annual gathering. Merritt received no sanctions and went on to perpetrate more frauds and hoaxes.

If you pay attention, you will recall that Shaun King and Lee Merritt also teamed up to perpetrate the Jazmine Barnes hate crime hoax of 2019. Seven-year-old Jazmine, who is black, was slain in a drive-by shooting in Texas. Merritt was a legal advisor to the Barnes family. King used his mighty Twitter platform to spread conspiracy theories of a racist white truck-driving shooter and defame an innocent man named Robert Cantrell, whose family faced death threats as a result of the witch hunt. The real shooting suspects were black thugs, prompting King to swiftly attempt to cover his tracks and claim phony credit for tipping off the police.

The fiasco prompted several of his old SJW allies to resurrect charges of mishandling past fundraisers. King and Merritt continue to be dogged by criticism of their financial exploits. Last fall, Merritt represented some relatives of Atatiana Jefferson, a black woman reportedly shot by a white Forth Worth police officer while inside her home. King swooped in with a GoFundMe campaign for his college BFF’s client that Jefferson’s father called unnecessary, unauthorized, and exploitative.

Let me refresh your memory of more of Shaun King’s greatest race fraud hits, which have been duly noted not just watchdogs on the Blue Lives Matter Right, but some of King’s own former colleagues on the Black Lives Matter Left:

In 2014, King promoted the anti-cop “hands up, don’t shoot” lie debunked by none other than the Obama Justice Department, yet he still doesn’t care about the truth. “I’m not going to parse evidence or make some complex technical argument that Michael Brown did or didn’t have his hands up,” he defiantly retorted. “To me, it doesn’t matter if he did or he didn’t. It never has.”

…In 2015, King gloried in the wrongful rape convictions of former Oklahoma City police officer Daniel Holtzclaw, whose flawed case and forensic errors led six internationally renowned scientists to call for a retrial. He has failed to follow up because, of course, the truth doesn’t fit his narrative.

The “journalist” also maintained the same obstinate stance after his disgraceful sliming of football star Peyton Manning in 2016, when he attempted to ride the #MeToo publicity wave by recycling — and woefully misinterpreting — a 13-year-old court filing regarding a settlement with a female trainer who had claimed she was sexually harassed, and then changed her story seven years later. Instead of admitting error, he played victim.

Which means brings me to the Number 3 reason to doubt the Ahmaud “Just a Jogger” narrative: Benjamin Crump. Merritt, a former intern of Johnnie Cochran, credits Crump as a mentor. The two were honored as “BLK Geniuses” by The Grio. Crump is also on Ahmaud Arbery’s legal team; the two have been making the media rounds together this week. If you pay attention, you know that Crump is the camera-lovin’ avenging lawyer for the families of Trayvon Martin and Michael Brown who rocketed to fame perpetuating the “Hands up, don’t shoot” lie. He’s also representing nine black women in federal civil lawsuit seeking to cash in on the wrongful convictions of Daniel Holtzclaw:

Those clients include a convicted felon who preposterously described Holtzclaw as a “short, black man” when he’s 6’1,” half-Japanese, and pale and a convicted felon who denied seven times she had been the victim of any inappropriate police conduct — until a sex-crimes detective informed her about the Holtzclaw investigation and she changed her story to claim that he had forced her to expose her breasts.

Crump also represents the troubled young prostitute and drug user with a violent criminal record who called Holtzclaw a “hot cop” before accusing him of rape — months after Jannie Ligons’ charges were publicized and Holtzclaw’s name and face widely disseminated. The teen’s mom had filed a missing persons report and assault and battery complaint against her daughter on the day Holtzclaw encountered her and searched her purse. The Oklahoma City police department’s crime lab identified a minute amount of what it characterized as “epithelial cell” DNA from this accuser on Holtzclaw’s uniform pants — the lone piece of indirect forensic evidence found out of 17 alleged crime scenes, which became the prosecution’s inaccurately portrayed “smoking gun” in the case.

Now, King, Merritt, and Crump–three of the most prominent, anti-white hate crime hoaxers in America–are at the heart of the Ahmaud “Just A Jogger” narrative. Thanks to their latest joint campaign, the New York Times reported yesterday, “Gregory McMichael, 64, and his son Travis McMichael, 34, were each charged with murder and aggravated assault and booked into a jail in coastal Glynn County, Ga.”

King pimped the requisite GoFundMe, which has already reached more than twice its goal and raised $200,000-plus for Arbery’s family.

He also posted the following threats to the McMichaels on Facebook (which, as you know, has banned Unz.com): Message: Swallow the narrative…or else.

Will the real vigilantes please stand up?

Top 3 Reasons to Doubt the Ahmaud "Just a Jogger" Arbery Narrative, May 8, 202

Once again, we find ourselves in a Trayvon Martin/Michael Brown situation, where truth is no defense when a racial lynch mob gathers to condemn (and amplify) the purported white supremacist murder of an innocent black body.

Halley’s Comet only appears every 75 years, but these incidents are happening with increasingly regularity. Malkin’s takedown of the Brunswick Hoax is a must-read, a reminder of just how willing (and how much demand) the corporate media and black athletes/celebrities are to manufacture white racism when the supply just isn’t there.