On the same day that the Republican Senate was sworn in and the GOP majority of the House was increased, Obama received Mexican Presidente Enrique Pena Nieto for a friendly chat about erasing America’s borders and sovereignty. It was just an accident of scheduling, surely, not a petulant act of an extreme President whose policies were rejected last November by the voters. 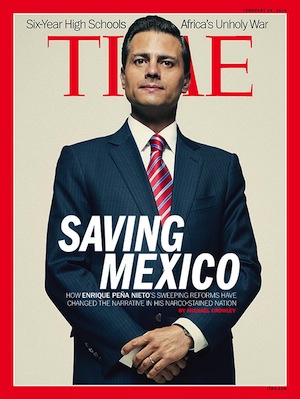 The meeting was certainly convenient for both. The US President got a friendly guest who wants the same thing that Obama wants — open borders and a firehose stream of future Democrat Mexicans into in this country. Nieto got an opportunity for flattering photos from in the White House, plus a welcome break from months of political battering at home. Last February, Time magazine hailed him as “Saving Mexico” with a hopeful cover story about the new reformer.

But these days, Nieto is not popular at home, following the horrific case of the 43 missing college students who were apparently kidnapped by police and turned over to gangsters to be murdered for disagreeing with a local mayor.

There were other scandals last year, mostly concerning on the power of organized crime in Mexico and its relation to the government. Reform didn’t happen under Nieto because Mexico is too corrupt and violent to be easily fixed.

Right on cue, the Daily Mail reported that Mexican cartel recruits are now required to eat the hearts of murder victims in an effort to keep out infiltrators. So Aztec.

But when el Presidente comes to call in Washington, Obama treats Mexico like any other country, which it isn’t. Mexico is a backwater of violence, antipathy to education and misogyny, yet it is the largest source of immigrants to America. Lucky us.

WASHINGTON — Mexico’s president,Enrique Peña Nieto, on Tuesday praised President Obama’s actions to shield millions of unauthorized immigrants from deportation, describing them as “an act of justice” after meeting with Mr. Obama at the White House.

In his own remarks, Mr. Obama thanked Mr. Peña Nieto for helping to inform Mexicans that the protections he outlined as part of an executive action on immigration last year would be granted only to those who have been in the United States for years.

“We’re also going to be much more aggressive at the border in ensuring that people come through the system legally,” Mr. Obama said, adding that the “Mexican government’s been very helpful” in making that clear.

Mr. Obama also thanked Mr. Peña Nieto for helping to stem the flow of migrant children into the United States from Central America last summer, saying that “at the southern border we’ve seen those numbers reduced dramatically to much more manageable levels.”

Mr. Peña Nieto’s visit to Washington coincides with increased cooperation between the United States and Mexico.

Mexico has responded enthusiastically to Mr. Obama’s move to regularize the legal status of people who are in the United States illegally, a majority of them from Mexico, and to normalize relations with Cuba, at a time when Mexico itself is seeking to repair frayed relations with that country.

At the same time, American law enforcement agencies have played major roles in the arrests last year of high-profile drug cartel leaders, including Joaquín Guzmán Loera, known as El Chapo, though Mexican officials tend to play down that cooperation.

“In these recent years, a level of mature and friendly relations has been constructed, first between the presidents and the governments,” Sergio Alcocer, Mexico’s top diplomat for North America, told reporters before Mr. Peña Nieto left Mexico for Washington. “This has allowed us to change the architecture of the relationship.”

Economic growth has slowed, the peso is falling in value against the dollar, and changes to allow foreign participation in the oil industry and other moves have yet to put more money in Mexicans’ wallets. In addition, the past several months have been dominated by a string of security crises, including the abduction and presumed murder of 43 teachers college students in southern Mexico in September and the killing of 22 people in a confrontation with the army in June.

Mr. Peña Nieto was also battered by revelations that his wife and finance minister had been buying homes from a top government contractor.

Shannon K. O’Neil, a Mexico scholar at the Council on Foreign Relations in New York, said the meeting exemplified the good rapport the presidents and the governments have developed, even if it highlighted only workaday deals, like civil aviation accords and promises for more efficient border crossings, not sweeping agreements. “It’s necessary but baby steps,” Ms. O’Neil said.

While Mexicans may have a high expectations for their northern neighbor’s role in security, she said the United States would probably be only a bit player in attacking entrenched problems like corruption and the lack of rule of law. “Corruption and rule of law have to come from Mexico,” she said, adding, “We can’t tell them what to do.”

Mr. Obama on Tuesday called the fate of the missing 43 students tragic and promised to support the Mexican government in its fight against drug cartels and its efforts to reduce gun violence.

“Our commitment is to be a friend and supporter of Mexico in its efforts to eliminate the scourge of violence and drug cartels that are responsible for so many tragedies inside of Mexico, and we want to be a good partner in that process, recognizing that ultimately it’s up to Mexico and its law enforcement to carry out,” Mr. Obama said.

In Mexico, many commentators have suggested that Mr. Peña Nieto seek broader help from the United States to address the recent security problems, but his administration has always sought to keep such American cooperation in the background. American law enforcement agencies have assisted in the forensic investigation of the missing students case, according to American officials, but Mexican officials have not discussed it.

Before the meeting of the two leaders, Vice President Joseph R. Biden Jr. hosted a meeting of senior officials from both countries in a discussion about ways to strengthen the economic ties between Mexico and the United States.

“A strong, integrated North American economy is going to attract investment and advance our shared prosperity, and present a platform for cooperation well beyond North America,” Mr. Biden said at the beginning of the meeting, called the U.S.-Mexico High-Level Economic Dialogue.

United States and Mexican officials began the dialogue in 2013, during Mr. Peña Nieto’s first year in office. The group met one other time, in 2014, before Mr. Obama’s visit to Mexico City. Mr. Biden said the discussions are aimed at deepening an already strong economic partnership.

“What do we want the U.S.-Mexico relationship to look like in the next five to 20 years?” Mr. Biden said, adding that the group should strive to set clear and achievable economic goals for the future. “We should leave here today with specific, precise goals. Nothing generic.”

White House officials did not announce any new economic initiatives with Mexico. But they said they would be adding energy and climate issues to the continuing discussions and deepening regulatory cooperation. They said the group would work to promote investment, women’s empowerment, transparency and anticorruption efforts.