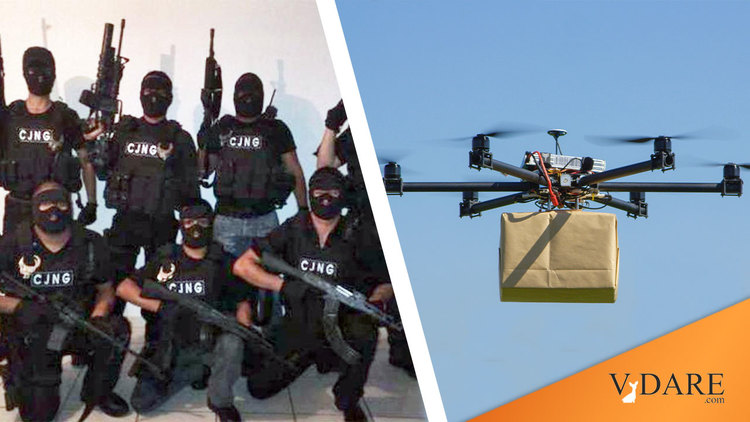 Mexican Cartels are Showing Off Their New Dangerous Toys

During my time in the US, one thing that has taken me aback is the ruling class’s twisted sense of foreign policy priorities.

During the last two decades, the US has prosecuted never-ending excursions in backwaters such as Afghanistan and Iraq, with very little to show for them. Well, if you’re in the defense industry, you probably raked in a serious amount of dough in making the case for prolonging these conflicts that serve no national interests.

While trying to remake these tribal cesspools in America’s image, the southern border has spiraled into chaos. Even worse, drug cartels have become so powerful that the Mexican’s state ability to hold a monopoly on violence has been called into question.

There are some bad hombres down south and they’re playing with some serious firepower:

This week, Mexican authorities confirmed that two police officers in Michoacán were injured by an attack from cartel gunmen who used commercial drones to drop IEDs, Breitbart Texas reported. The attack came after state police officers removed a series of roadblocks aimed at keeping rival cartels from using armored SUVs to carry out attacks in their attempts to take control.

While various news outlets in Mexico claimed that Cartel Jalisco Nueva Generacion (CJNG) instigated the attack, law enforcement sources in Michoacán revealed to Breitbart Texas that authorities believe an alliance known as Carteles Unidos were actually the ones behind the drone attacks.

One point from the Breitbart piece that caught my attention was how the cartel drone operators may have received military training in the US:

Information obtained exclusively by Breitbart Texas revealed that the operator behind the development of the weaponized drones claims to have had U.S. military training. However, Breitbart Texas was not able to confirm the claim.

Perhaps this is speculation, but there is past evidence of Mexican cartels hiring U.S. soldiers as contract killers [Mexican cartels hiring US soldiers as hit men, Fox News, August 1, 2013]. There’s plenty of military muscle in the US that has bleak economic prospects, so the allure of lucrative cartel gigs is tantalizing. Plus, 16% of the U.S. military is made up of Hispanics, where there’s likely a not-so trivial number of them who perhaps feel more at home serving as mercenaries alongside their kin [Latinos are fastest growing population in US military, but higher ranks remain out of reach, by Adrianna Rodriguez, USA Today, May 23, 2020]. As they say, blood is thicker than water.

In Mexico, you have a government that is incapable of containing drug cartels, who grow even stronger year after year as they carve out statelets within the country. As a result, Mexico has hit institutional rock bottom, which should make any sane policymaker in Washington concerned about the prospect of a failed state right across our border. The cartel violence that has made Mexico infamous worldwide will spill over to the U.S. if Open Border Inc. has its way and busts open the floodgates to mass migration.

America must get serious about border security and potentially taking punitive action against Mexican cartels. U.S. Special Forces would make short work of Mexico’s narcos and at least stymie their efforts to destabilize America. But we’re talking about military action that’s in America’s national interest, so the current ruling class would never approve of it!