Media Criticism Needs To Work On Concepts That Don’t Exist In The MSM, Like "Hate Hoax" And “Anti-White Hate” 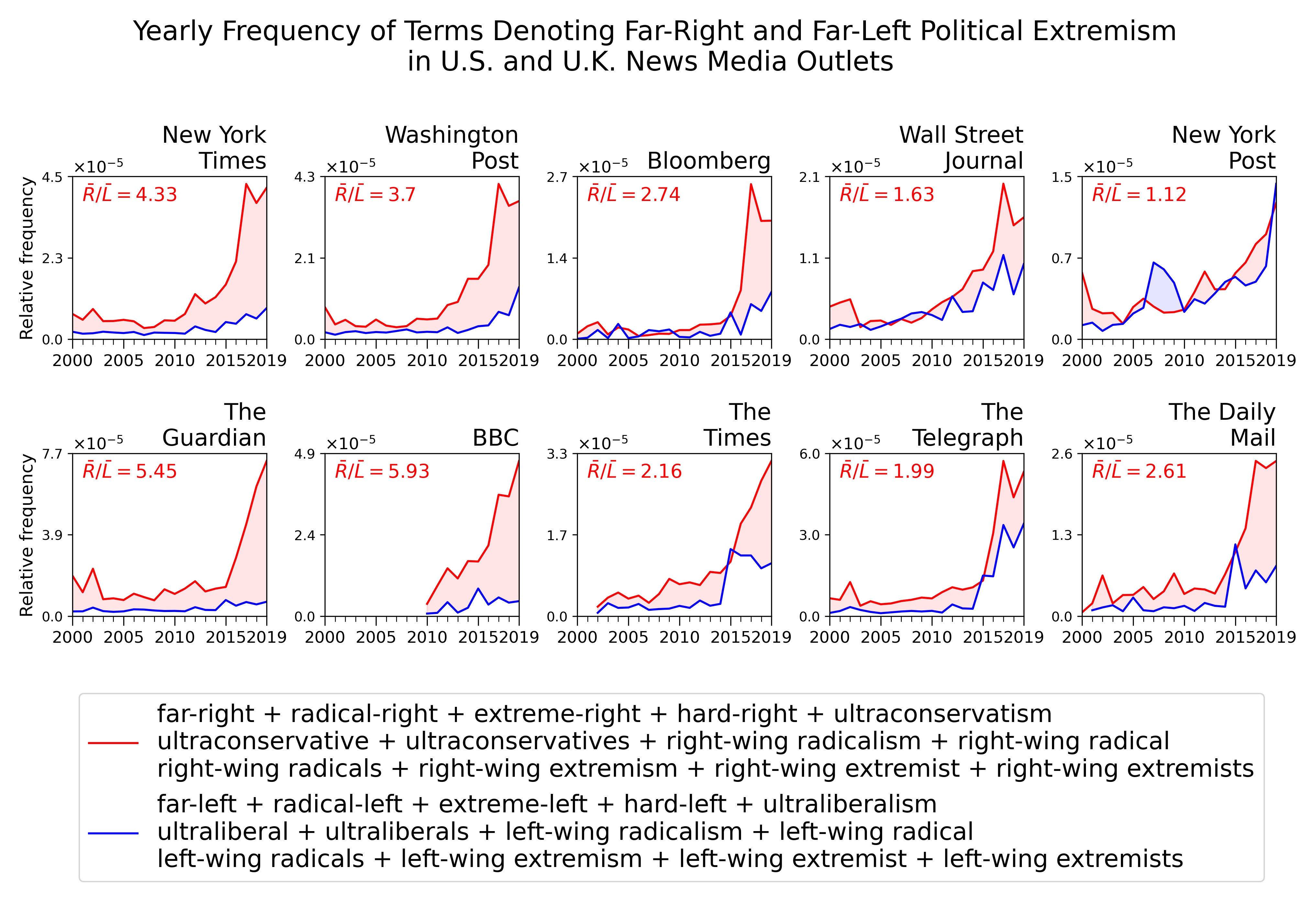 I look forward to Professor Rozado extending his analysis of terms denoting “far right” and “far left” in the news media to 2020, when leftists rioted hundreds of times (but mostly peacefully!), and to 2021 when January 6 no doubt caused coverage of “far right” to go to infinity and beyond.

The biggest limitation of this work is that we cannot elucidate whether the media’s increasing use of terms denoting political extremism is driving, exaggerating or merely responding to concomitant rising political extremism in society. It is conceivable that far-right activity in society could have increased more markedly than far-left activity, justifying news media concern about it. It is, however, challenging to establish an Archimedean point of political neutrality to use as a reference for determining precisely what counts as political extremism.

While it is indisputable that groups which are labeled hard-right have been increasingly prominent in U.S. and European politics, it is also plausible that the center of gravity in established media newsrooms, as in other elite professions, has been shifting leftwards, especially as prestige news media is increasingly organized and edited by graduates from elite universities who tend to hold increasingly socially liberal beliefs. Therefore, a plausible explanation for the asymmetry in the prevalence of terms denoting left and right political extremism in news media content could be due to the ideological imbalance in newsrooms that might shape journalists’ choices of political adjectives.

Another potential explanatory factor for the rising incidence of political extremism-denoting terms in news media is the existence of financial incentives for media organizations to maximize the diffusion of news articles through social media channels by using language that triggers negative sentiment/emotions or using political out-group animosity to drive engagement in social media-based news consumption.

All of the aforementioned hypotheses (rising political extremism in society, the political biases of news media professionals shaping what gets labeled as political extremism and financial incentives motivating the usage of emotionally charged language) are plausible and consistent with our results on the rising prevalence of political extremism terminology in news media content. Yet, our methodology cannot adjudicate among them. This is, therefore, an open question for future research. Investigating the social ramifications of the increasing prevalence in news media content of adjectives suggestive of extreme political beliefs could be another relevant topic for future research.

To conclude, we find rising prevalence in U.S. and U.K. news content of terms that denote left and right political extremism. Most news media outlets tend to use terms that denote far-right political inclinations substantially more often than those pertaining to the far-left. The rising usage of terms denoting political extremism in news media started prior to 2015 and is analogous to concomitant growing usage of terms denoting prejudice and social justice discourse in news content (see here and here). The fact that U.K. media trends are similar to those in the U.S. suggests the existence of common factors driving these trends internationally.

I’d like to give Dr. Rozado a list of concepts that basically don’t exist on the left and the center media, but do exist (finally) on the right, like “hate hoax” and “hate crime hoax,” or variants of “anti-white hate.”

I’d also like to see tracking of references to favorite examples of left and right. I’ve long been on the Emmett Till Beat, covering the countless times the 1955 Emmett Till Case comes up in contemporary news coverage. In contrast, my impression is that there hasn’t been much in the way of reference in the press lately to the 1945 Louis Till War Crimes Case, in which Emmett’s father was executed for raping an Italian civilian woman and murdering two others.

One problem of course is that while the Emmett Till and Louis Till cases are interesting to compare, they aren’t exactly comparable.

For hate hoaxers, it might be worth comparing Tawana Brawley to Susan Smith, who murdered her children in 1994 and notoriously blamed a black man.

So, for instance, what are the names of the most heinous cases of unarmed whites who got gunned down by cops with impunity?

It would also be useful to have a list of words that have taken on increased political salience in recent years, such as “conversation” and “pounce.”