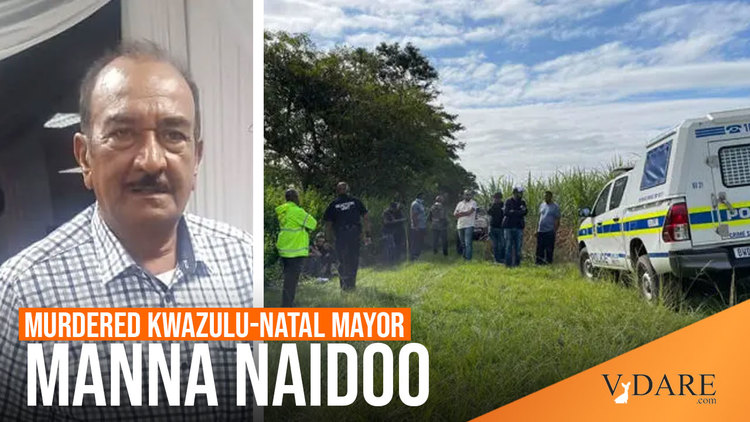 May Farm Attacks In South Africa: A Murdered Mayor, And A 67-Year-Old Farmer Doused With Boiling Water

Farm attacks continued in May. Unlike the U.S., there are not many victim photographs, because the victims are still in danger, and don't want to draw attention. An exception is the former mayor of Verulam, above, who is a public figure.

The victim’s body was discovered in a cane field near his farm. He as riddled with bullets. Reports say the safe in his home was open and four of his firearms missing. (Naidoo is a Hindu name, the South African spelling of Naidu—there is no Coalition of the Fringes in present-day South Africa.)

Also in the home were the victim’s wife, three children, and their grandmother. Five assailants fled taking one cell phone.

[Farm attack, man shot in both legs during house invasion, Boschkop, by Crime Correspondent, southafricatoday.net, May 25, 2022, 2022]

The couple fled, but were chased, assaulted, and bound.

One of the workers returned to the house to retrieve a forgotten item. Noticing someone fleeing the house, the worker notified neighboring farmers who captured the assailant.

The 67-year-old farmer was doused with boiling water and family members were choked and beaten. The thieves took cash and cell phones.