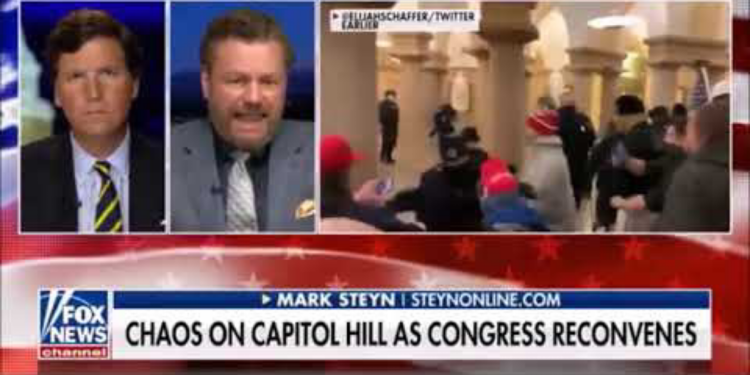 Mark Steyn On Tucker Carlson: "People Are Surprised When A Tactic That's Proved Effective By One Group Of People, Is Taken Up By Another Group Of People"

Mark Steyn appeared on Tucker Carlson to discuss the protests on Capitol Hill, saying things like:

'People say 'this is not who we are.' Have you not turned on the tv since Memorial Day? This is exactly who we are...

Steyn's point about tactics is the same point Peter Brimelow made in Ruling Class Angry Apes Don’t Like It, But They Taught America That Violence Works.

Steyn writes on his own site:

During the early evening I found myself wondering why the pundits were so insistent on standing on the Capitol's dignity. The obvious reason is that, for the most lavishly protected legislature in the world (okay, make that "legislature"), it was a total security fiasco - culminating in the murder of an unarmed woman by a (to put it mildly) totally incompetent copper firing into a crowd (which an American couldn't do in, say, Kandahar). The rubbish about the "desecration" of the "sacred" "majesty", etc, etc, peddled by Democrats and Republicans alike is designed to evade the vile reality of that grotesque act. [Emphasis added]

For more about the killing of Ashli Babbitt, see:

For a theory about how a "totally incompetent copper" could be guarding the World's Greatest Deliberative Body {TM} see Ann Coulter's Would It Kill You To Hire More Black Cops? (Yes).