Mark Steyn On Corporate Harassment Of VDARE.com: "I Can Think Of No Reason Why In A Free Society A Person Should Not Be Entitled To Hold Such Views."

Mark Steyn starts out his latest "War On Free Speech" article with this:

About twenty years ago, when Tony Blair was in the midst of "reforming" - ie, wrecking - the House of Lords, I suggested in The Sunday Telegraph that he replace it with the House of Gays, since, as a small, unrepresentative elite exercising power and influence out of all proportion to their actual numbers, gays were now the contemporary equivalent of the old peerage. It wasn't the greatest jest, but Page Six in The New York Post and a few other papers picked up the quip and reported on it. And, running into me a few weeks later, my National Post colleague David Frum asked if I'd been a bit nervous about its edginess. I giggled, and said that originally I'd written that Mr Blair should replace the House of Peers with the House of Queers, but I'd amended it because these days only G&S fans recognize the formulation "House of Peers".

That's from Gilbert and Sullivan's Iolanthe: 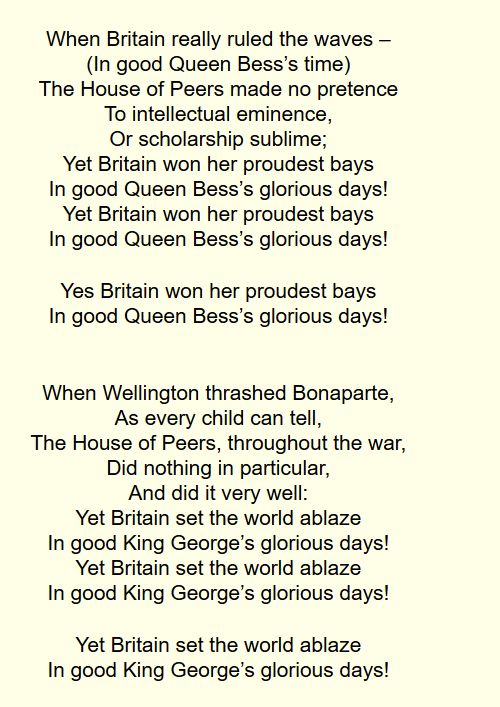 Thick-headed but mostly harmless Peers are a lot less dangerous than SJWs, but as Steyn points out, we may be expected to find electoral room for a "House of Gays" in real life.

One of the problems with cheap jokes is that you wake up one morning and find that everyone who matters in society is doing them for real. Mine, for example, discerned, albeit carelessly, something about the coming era of "identity politics" before the phrase was really in widespread circulation - before "identity" became "politics", and indeed swallowed the very idea of old-school, non-identity politics.

There's a lot more, but some of it concerns us:

The dictatorship of the identitariat is spreading rapidly, as all bad ideas do, way beyond loony campuses. If the right to freedom of speech no longer has much purchase on society, the law of contract for the moment still prevails - so I congratulate VDare.com on extracting a five-figure sum from Hilton Hotels for screwing them over and canceling their annual Immigration Reform Conference in Arizona. VDare are opposed both to illegal immigration and the legal immigration enabled by the 1965 act. I can think of no reason why in a free society a person should not be entitled to hold such views. But, in the wake of last year's statue-toppling frenzy, PayPal (a de facto Internet monopoly) booted out VDare, and other contractors, such as Hilton, followed suit. Some corporations do this stuff because they're headed by social-justice ideologues who are genuine believers; others are merely jelly-spined wankers thrown into a tizz by a couple of hostile Tweets coming over the transom. I have no idea into which category Hilton fall, but I certainly hope the "five-figure sum" was in the high five figures - and even then that isn't really big enough to discourage this malign trend.

The New House of Peers

Steyn links not only to Lydia Brimelow's report on the  settlement with the latest conference venue to back out on us to bot to a YouTube clip of himself defending our right to a PayPal account on Tucker Carlson:

No good deed goes unpunished, though. Steyn was immediately attacked for being absolutist enough to defend us.

John O'Sullivan  explains what's wrong with that on Twitter.

I certainly endorse Mark Steyn's argument and the rights, not "rights," of everyone from V-Dare across the spectrum to the Marxist Left to write articles, hold conferences, and use other lawful means to express their opinions. If you don't, you're endorsing an illiberal tyranny. https://t.co/TOKAKmtHEJ